EAA Chapter 932 at Galt Airport in Wonder Lake, Illinois has a unique relationship with EAA Chapter 322 in Johannesburg, South Africa.  For many years we have camped near our South African friends at  Airventure in Oshkosh, and earlier this year we had a joint virtual gathering together on Zoom.  Since the onset of the Covid crisis, members of both chapters have been frequent guests at each chapter’s virtual gatherings.  For the past two months, I have been going through Captain transition training on the Boeing 787 with my job at United Airlines.  During the final stages of my training known as “Initial Operating Experience” (IOE),  I had the opportunity to operate a trip out of Newark International Airport (KEWR) to OR Tambo International Airport in Johannesburg, South Africa (FAOR).  My flights were under supervision of a Line Check Airman (LCA).  The flight time between KEWR to FAOR was approximately 14 hours!  The route of flight took us across the Atlantic Ocean, making landfall over Sal, Cape Verde, Africa, and then down the coast into South Africa.  It was definitely a first for me to operate such a flight segment at United Airlines.  United began non-stop service from Newark to Johannesburg this past summer.  During this trip I completed my captain qualification on the Boeing 787.

Before leaving on the trip I reached out to EAA Chapter 322 President Neil Bowden, and chapter member Marie Reddy.  Neil was excited to hear that I would be making a visit to South Africa, and indicated to me that their chapter would be having a pancake breakfast / fly-in at a nearby private airfield called Silver Creek during my layover.  Neil invited me to attend, and put some of his chapter members in motion to accommodate my visit.  Just after my arrival in Johannesburg, chapter member Marie Reddy picked me up at my hotel and drove me out to a small airport west of Johannesburg called Krugersdorp Airport (FAKR).  Krugersdorp is where many members of EAA 322 base their aircraft.  We started off visiting the hangar of chapter member Dale de Klerk. Dale had some really neat airplanes in his hangar.  His collection of aircraft included a 1961 “Mini Ace” – known to be the oldest home built aircraft in South Africa, and powered by a Continental AC-65 motor.  Parked next to it was Dale’s 1940 Piper Cub – powered by a Franklin 4A-176 motor.  It is the only Piper Cub of this vintage in South Africa.  After checking out Dale’s collection of aircraft, we enjoyed cups of coffee and tea in his hangar.  Chapter member Derek Hopkins joined the group after arriving in his RV-8 in which I flew in with Derek over to Silver Creek.  Silver Creek is located about 25 miles west of Krugersdorp.  Marie and her friend, Dom,  took off ahead of us in Marie’s beautiful Icarus light sport.  It did not take long for me and Derek in his speedy RV to pass the two ladies in the Icarus.  Derek flew by them, and did a fun aileron roll as we pulled up and sped away toward Silver Creek.

Within 15 minutes we arrived at Silver Creek Gorge Airport.  There were an abundance of airplanes parked aside the 2800’ paved strip that is carved out in a remote and rugged area of the South African countryside.  As we landed I noticed dozens of airplanes of all types that were attending the fly-in.  Derek taxied us up to the main area of the event, and as we parked, we were quickly greeted by chapter president Neil Bowden, and many other chapter members.  I felt like a rock star as several people were taking pictures of my arrival.  I was overwhelmingly greeted by many welcoming South African EAA members.

I spent the morning talking to many interesting folks, and checking out the variety of airplanes and helicopters at the event.  Many of the aircraft at the event were very much like the home builts and manufactured aircraft one would see in the USA, while there were also some very unique types that I had never seen before.  Like any other fly-in, people were anxious to show their aircraft, and talk about them with great pride.  Neil Bowden has a Sling light sport that he dubs “The Spirit of Oshkosh”.  The South African vanity registration on it is “ZU OSH” with an American flag on the tail.  Neil takes a lot of pride in his airplane, and also leading their chapter’s long pilgrimage to Oshkosh every year. Due to Covid they have missed two years in a row, and are all very anxious to come back to Oshkosh in 2022.

After meeting people, and checking various aircraft, I finally had an opportunity to settle in and eat some pancakes.  The pancakes served were a bit different than the round battered version that we see in the USA.  A group of youngsters were operating a very interesting pancake contraption that pressed out battered “sheets” of pancake mix.  After taking my sheet of pancake, there was a large pot of “mince” off to the side.  Mince is kind of like chili.  Ground beef in some red sauce with corn kernels in it.  I scooped the mince over the pancakes, and had some sliced banana off to the side.  While eating, chapter member Karl Jensen gathered a group of people into the room.  Karl is a really neat guy.  He is a retired Boeing 747 Captain from South African Airways.  In his retirement he flies a beautiful 1955 Cessna 170.  Neil Bowden and his young grandson came aside me, and I was presented with an award.  The award was for traveling the furthest distance to attend the event!  The framed certificate presented to me denotes that I had traveled 8,681 miles from Galt Airport in Illinois to Silver Creek Airport!  It was an honor to receive this, and all the folks really made me feel very welcome.

Before I knew it, I had to start making my way back to Krugersdorp.  My layover timing was fast and furious.  The aircraft that I returned in was really cool.  Neil arranged for me to fly in a vintage 1960 Alloutte helicopter.  The helicopter was manufactured in France, and owned by chapter member Eugene Couzyn.  Eugene was a really neat person.  He has a passion for flying helicopters.  He has been flying helicopters for nearly 30 years, and has owned his Allloutte for 17 years.  We took off from Silver Creek for the short flight back to his base at Krugersdorp.  Along the way we did some low level flying across some very rugged landscape.   Eugene handed me the controls and let me fly.  I quickly realized that a helicopter is a completely different animal than an airplane.  Eugene coached me along, and I warmed up to flying his beautiful machine.  Upon arrival at Krugersdorp, we practiced some hovering over a grass strip.  He let me have the controls once again.  It was a rather humbling experience for me as I gained an entirely new respect for flying a helicopter!  Someday perhaps I will get some instruction in a helicopter!

Before I knew it Marie and Dom arrived back in the light sport, and it was time for me to go back to my hotel in Johannesburg.  I took a long afternoon nap, and before I knew it, my crew of 4 pilots and 10 flight attendants were being picked up for our return flight to Newark.  The flight back to Newark was about 15 hours.  Overall it was long and uneventful.  I slept during the second half of the flight in the crew bunk located above the first class cabin.  I woke up about 90 minutes prior to landing, had breakfast, and flew the approach and landing into Newark.  After passing through customs, I realized that I had quite the whirlwind trip – back and forth to South Africa in 3 days!!!  It’s crazy to think how small our world is through aviation.  Our friends at EAA Chapter 322 are genuinely awesome folks.  You can’t miss seeing their huge encampment each year at Camp Scholler in Oshkosh.  If you are there, take a moment to stop by and see them.  You will gain a whole new perspective in aviation located in a very unique part of the world! 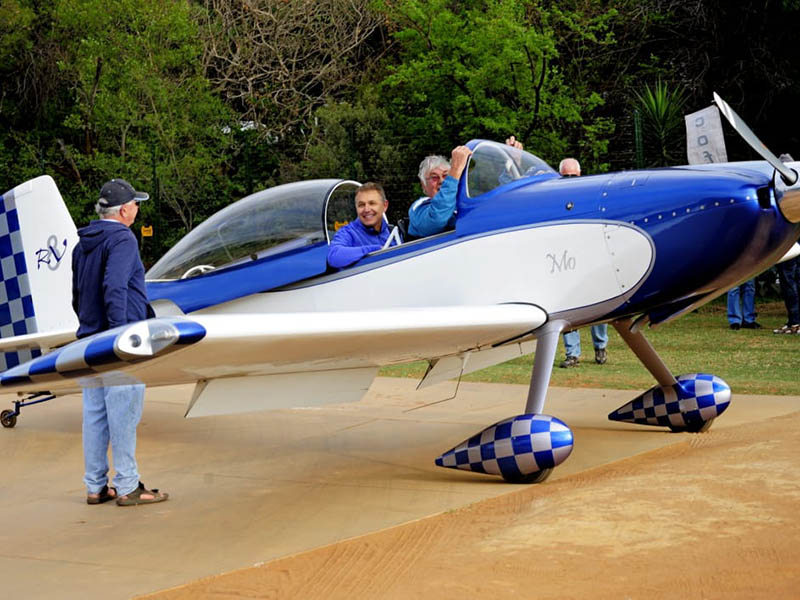 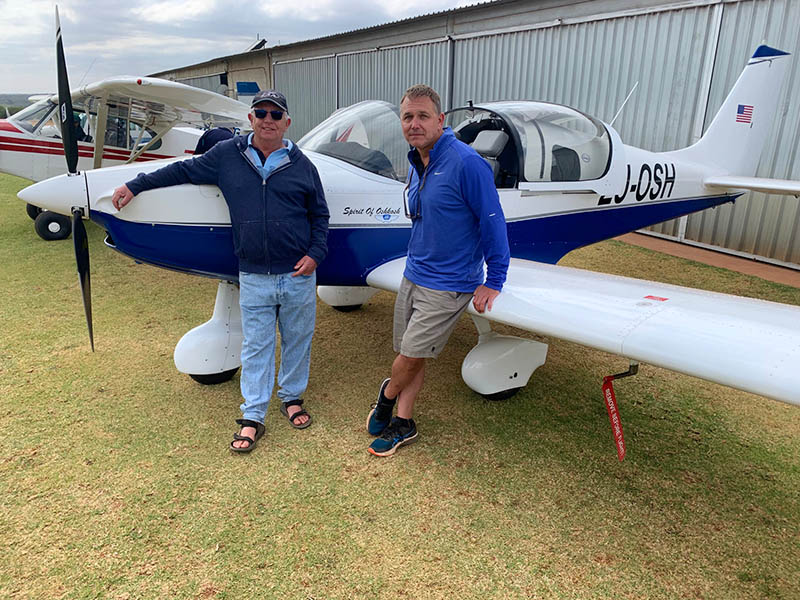 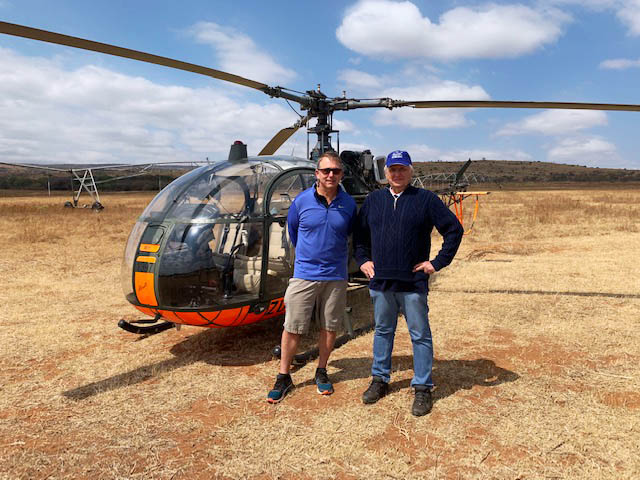 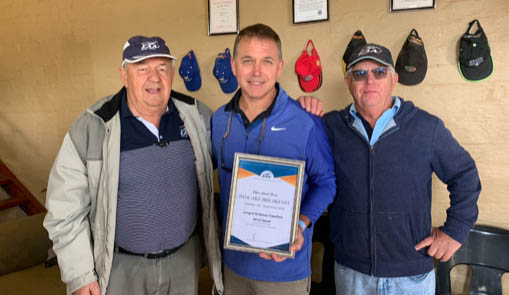 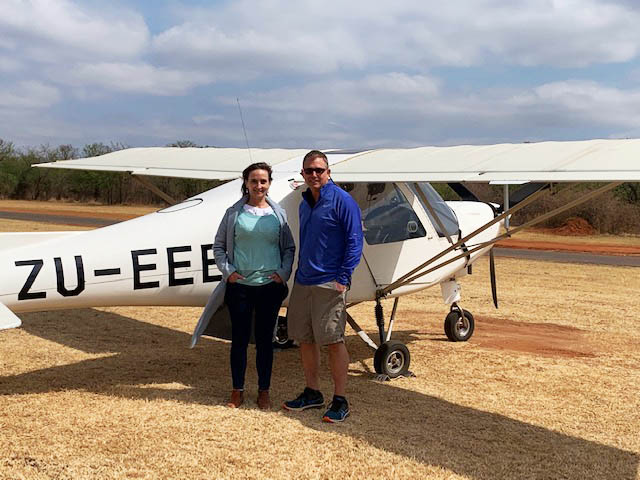 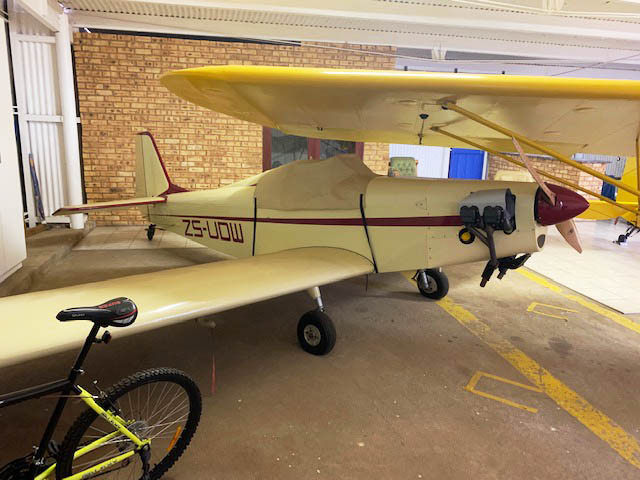