The Weather Outside Was Frightful

The Weather Outside Was Frightful 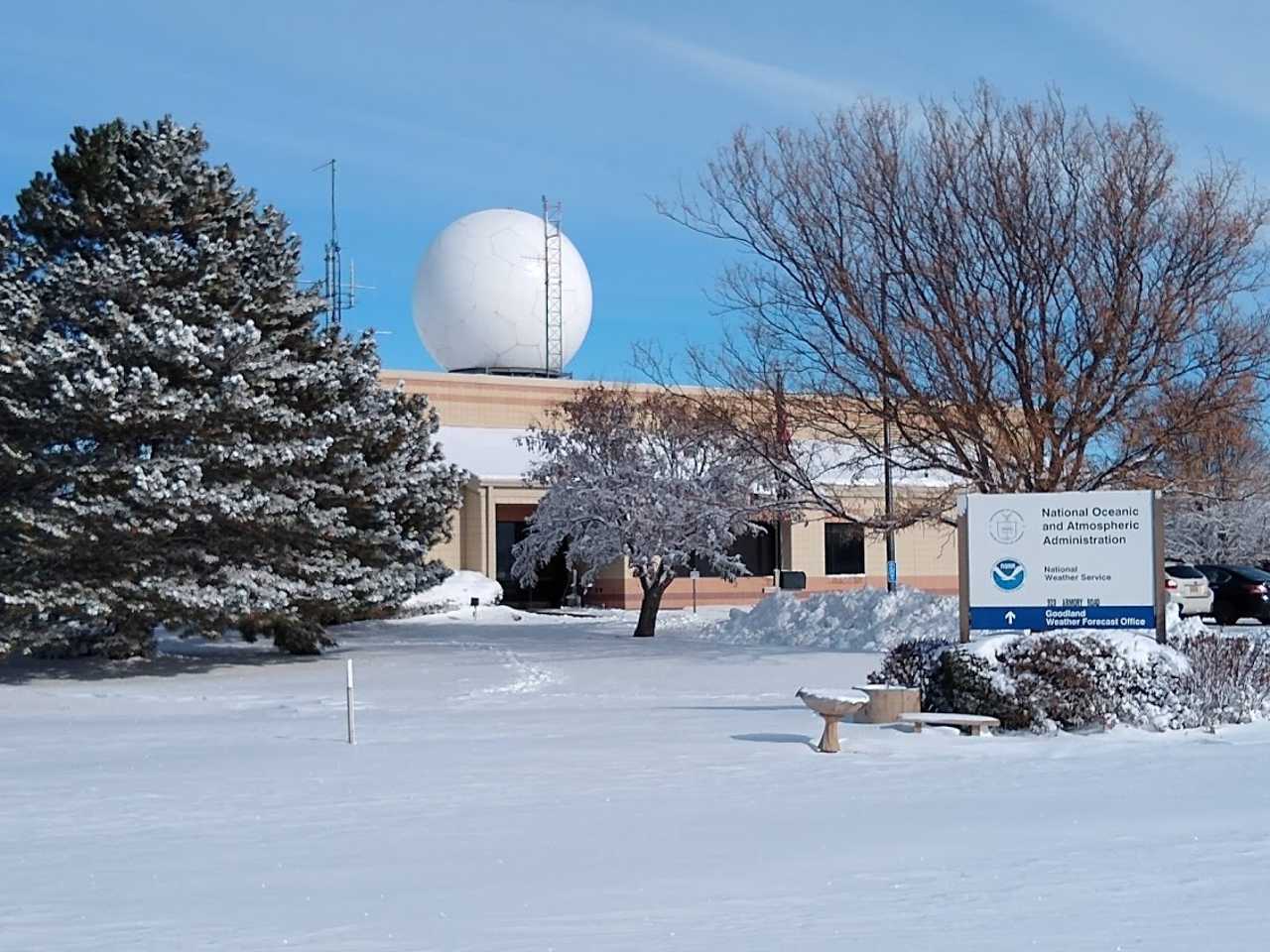 An Unplanned Visit to NOAA

Traveling during cold and snowy months is always unpredictable. But, we watch the weather and do our best to plan accordingly.

My wife and I were driving to Denver to spend the Thanksgiving holiday with family. Normally, we would drive I80 across Nebraska and eventually head southwest to Denver on I76. But a large winter storm was swirling into the Rockies from California, with indications that it would be moving across the country on a northeasterly track, making road travel through Nebraska more than a bit dicey. The storm made a more southern route across Kansas a better choice.
As we drove west, the storm’s eastward movement began causing road closures along I70, first in eastern Colorado, then into western Kansas.
We were about to run into a very windy snowstorm head-on.

By early afternoon, it was apparent that we could get no further. I called ahead and was able to find a room near Goodland, KS. (You might recall Goodland as the home of the first patented helicopter in the U.S. which appeared in the Galt Traffic November 2018 issue.)

The morning of Thanksgiving eve greeted us with a dazzling white landscape, a brilliant blue sky…and trucks crawling west along I70 on 3 inches of ice. Deciding that we really didn’t need to add to the traffic problems, I decided to give the sun some time to do its thing to alleviate the mess. Then, I spotted a street sign reading NOAA Building directing me up one of Goodland’s streets. I didn’t know what to expect, but we had time, I was curious. 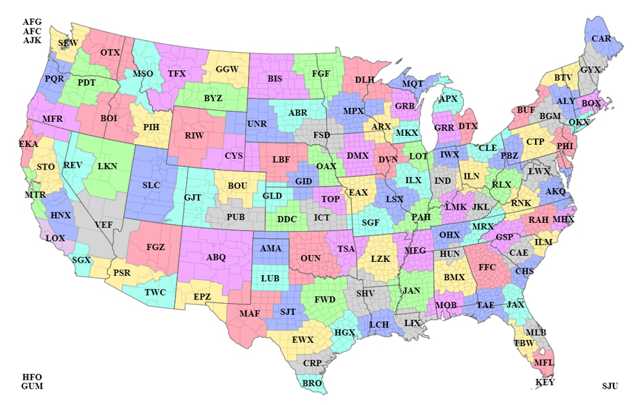 The NOAA facility is actually one of 122 offices of the NWS (National Weather Service). This one is adjacent to the city-owned, non-towered Renner Field (Goodland Municipal Airport – KGLD). In the vestibule, a sign indicated that I needed to press a button to enter, but a friendly staff member happened to spot us through the glass wall and allowed us access to the front office.

I described our travel situation and asked if there was any kind of a brief tour that Marie and I might get of the facility. I also indicated I was a pilot, a pronouncement that causes an automatic eye roll from my wife.

We were introduced to a meteorologist by the name of Joseph, who agreeably escorted us into a main work room furnished with nine identical workstations, each having five computer monitors and a pair of keyboards and mice. At the time, four people appeared to be on duty though there were also several offices on the perimeter that may have been occupied. 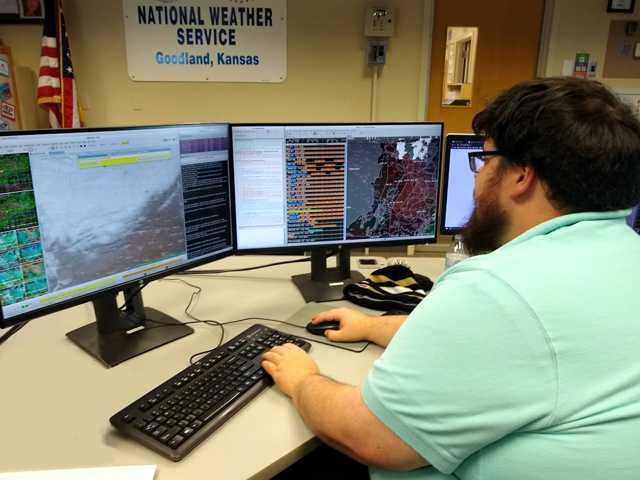 Before we interrupted, Joseph had been updating a TAF. While the FAA sets the definitions for TAFs, METARs,SIGMETs, AIRMETs and other products, the National Weather Service (NWS) provides the actual data we see on the Aviation Weather Center (AWC) site at aviationweather.gov. The information you hear when you access an ASOS (Automated Surface Observing Station) is provided by through a local NWS office.

The Goodland facility (GLD) covers northwest Kansas, a portion of southwest Nebraska, and middle-eastern Colorado. That area sees weather that comes from the front range of the Rockies and sweeps across the high plains of Colorado. That weather can be very different that the weather across the rest of Kansas. Goodland is the county seat of Sherman County, which sees more tornadoes than any other area in the country!

The Goodland office stays in constant touch with neighboring offices in Boulder, Pueblo, Hastings, North Platte, Cheyenne and others via a dedicated computer chat room utility, phone, 2-way radio and other methods, to collaborate and coordinate their forecasts.

Temperature, dew points, winds, wind gusts, cloud cover, predominant weather types (snow, freezing rain, fog, etc.), moisture amounts, dust caused by drought, smoke from wildfires, the percentage of precipitation are just some of the important items that the staff may be monitoring at any time. When you hear someone say “there’s a 30 percent chance that we’re going be getting significant snow,” that number likely originates with the meteorologists at a NWS facility nearby.

I asked Joseph just how much human conjecture is involved when predicting the weather. He explained that research has shown that the most value that they can add as human forecasters is in the first couple of days. That’s when they might look at a model and say, “No, that’s not what I think is going to happen. Lets raise the temperatures,” or maybe “I think we should increase the winds.” That’s the point where I like to think science meets art. The reality is that the art is an education enhanced by experience.

Forecasts are most accurate in the first 36 hours. At the local scale, meteorologists generally don’t forecast beyond 7 days. Studies confirm that computer models typically have a better track record when developing extended forecasts. Meteorologists will typically blend several models and add value by tweaking the numbers based on their experience and daily verifications. 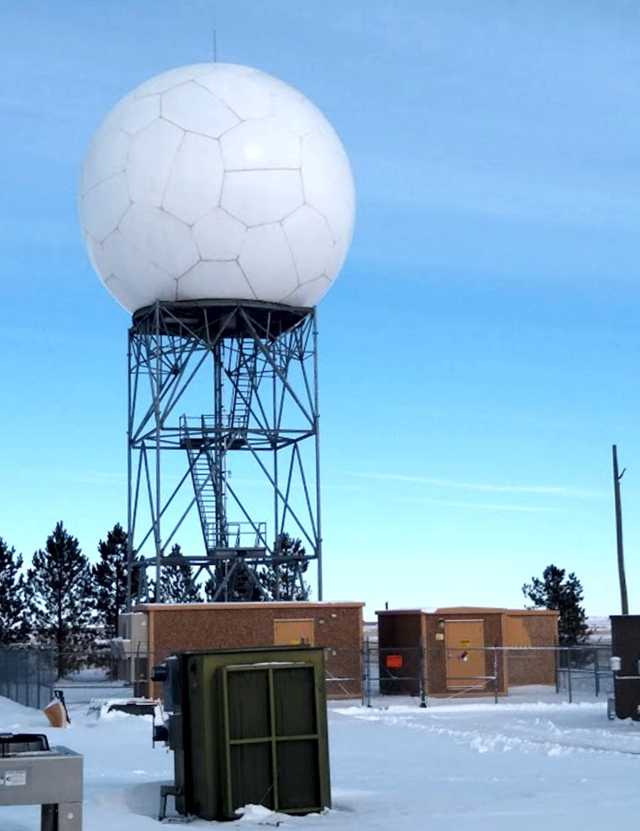 Joseph then lead us outside to see their radome, the giant “soccer ball on a tower,” thing we saw as we drove toward the NWS office. The rotating dish and it’s protective dome is on a platform 60 feet off the ground. It operates 24/7/365, sending out a steady radar beam. When that beam bounces off clouds or precipitation, a portion of the signal reflects back to the receiving dish as data, which is fed directly into the office, where the quality of the data is verified, and sent out into the world. When I asked how long it took to make a full “sweep”, Joseph indicated that there wasn’t a simple answer to my question. The dish makes scans horizontally and also in several elevations, receiving its data from a virtual cone-shaped segment of the atmosphere specified by the meteorologists. That area can be dependent on a particular weather feature that they are interested in. On a clear day, like the one we enjoyed during our visit, the dish can do a full-volume scan, that is a full coverage of the sky horizon to overhead, doing one full rotation, then tilting up a number of degrees and doing another rotation, etc., in approximately 10 minutes. However, on a severe-weather day, they can program the dish to operate faster so information can be gathered more quickly.

When a big weather event is anticipated, such as a tornado outbreak, the office will call in more staff and split duties into sectors. Several people may be working radar operations. One person may be watching east Colorado, another assigned to watch the area north of I70 while another watches south of I70. Someone else may be looking for possible flash flooding development. The office can spool up very fast.

Each workstation can handle the full functions of any other. When the Dodge City office once went down due to a communication problem, Goodland NWS took on all of the Dodge City functions, assigning an entire team to concentrate on delivering Dodge City area forecasts.

I am grateful to the welcoming and knowledgeable staff of the Goodland NOAA/NWS facility, with special thanks to Meteorologist Joseph Patton, who generously showed Marie and me around the office and radar tower and provided an excellent overview of what the NWS does. Thanks also to the several other meteorologists there who answered my questions and helped deepen my understanding of the scope of their work.
The mission of the National Weather Service is “to provide weather, water, and climate data, forecasts and warnings for the protection of life and property and the enhancement of the national economy.”

These scientists combine technology, research, experience and skill to accomplish that mission to the best of their abilities. I think they do it very well.

The atmosphere is a chaotic system. It is simply not possible to accurately predict weather processes that even meteorologists don’t always understand. Enter the Weather Model. In the simplest sense, a model is a computer program that uses raw data to simulate what the future weather conditions might be. However, because of the nature of the atmosphere, no one model consistently produces the best forecasts, so a large number of models have been developed around the globe.

Each model has advantages and disadvantages. The US maintains the GFS (Global Forecast System) model which runs on supercomputers somewhere in Maryland. Other models, like the NAM (North American Mesoscale Model), the RAP (Rapid Refresh Model), the ECMWF (European Model), the Japanese Model and numerous others have been developed.

Forecasters seldom utilize only one model. Instead, they compare the output from several models that are fed the same raw data. Doing that helps reduce uncertainty in predictions.

Another method of reducing uncertainty is by doing what’s called ensemble forecasting, in which multiple simulations are run using one model, with each simulation having a very slight variation in the data. Maybe the temperature is lowered by a degree or the winds are increased 2 knots. By generating a range of possible outcomes, it’s possible to show different scenarios for several days forward. Multiple simulations can serve as an indicator of how long into the future the forecast may be useful. The smaller the difference between outcomes, the more accurate and reliable the forecast is likely to be.

Models can be created to serve specific needs: some produce long-term forecasts, others may have faster updates; some are capable of producing greater detail over a shorter time period, while others can produce greater resolution for more localized events like thunderstorms, tornadoes, etc.

Sorting out the Acronyms

Given the broad availability of weather information, I never thought much about exactly where it all comes from and what the hierarchy of the weather providers is. So I asked some questions and did some research. Here’s what I’ve found.

1. NOAA, the National Oceanic and Atmospheric Administration, an agency of the U.S. Department of Commerce, is headquartered in Silver Springs, MD.

There are 122 NWS offices around the country. In addition, large airports such as O’Hare often have a CWSU (Center Weather Service Unit) on site to help coordinate weather information for Air Traffic Control.

3. A Flight Service Station (FSS) is an integrated FAA weather provider that bundles weather products derived from NWS data to serve the specific needs of pilots. In addition to a comprehensive forecast, an FSS briefing can include PIREPs, AIRMETs, SIGMETs, Convective SIGMETS, NOTAMs, and TFRs (temporary flight restrictions).

4. DUATS (Direct User Access Terminal Service), once a separate weather information and flight planning service provider contracted by the FAA. The service was discontinued on May 16, 2018.

Replaced by…
5. Leidos. This name isn’t even an acronym. Believe it or not, it’s clipped from the word “kaleidoscope”. (Can’t accuse them of being creative.) It is a publicly-traded company, an independent FAA provider, spun off from SAIC (Science Applications International Corporation) and merged with Lockheed Martin Information Systems & Global Solutions. It can be accessed as Flight Service (FSS) at 1800wxbrief.com.

However…
6. Tablet apps like ForeFlight, Garmin Pilot, FltPlan Go, WingX, AeroVie, FlyQ, and others including Flightplan.com, offer interfaces and value-added features that include preflight weather briefings, flight planning and filing, eliminating the need to access Leidos directly, though some applications do so in the background and require you to be a registered Leidos user.