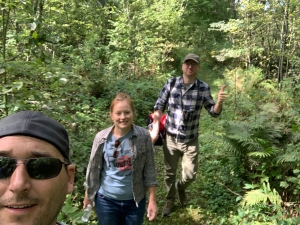 “It’s been on my bucket list for years!” Justin exclaimed as I looked at his photos on the monitor.

For the record, Justin Cleland is the J in JB Aviation, the company that runs the FBO at Galt Airport. The “it” on his bucket list is a flight to a tiny uninhabited, tree covered dot in the middle of Lake Michigan named North Fox Island that happens to have a 3,000 ft. grass runway (6Y3) and pretty much nothing else.

If you went there expecting souvenir shops and Starbucks, you’ll be mightily disappointed. If, however, you were looking for solitude and scenery, you’d find both in abundance. Unless, of course, you arrive on the day that the a group fly-out arrives. More about that later.

Intrigued by North Fox Island ever since he first spotted it on a sectional eons ago, Justin decided that this was the summer he’d do it. He planned the flight for months. Suddenly, the realization that the season was waning, made it a now-or-never proposition. Mike Evans and Rebekah Busse quickly signed on for the adventure in the twin-engine Piper Aztec named Monte that Justin co-owns 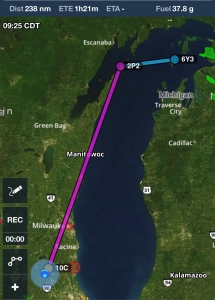 North Fox Island is owned by the state of Michigan. The grass airstrip and several miles of hiking trails are kept mowed by volunteers from the RAF, the Recreational Aviation Foundation (see sidebar on page 3).  There’s a sandy beach that allows for a pleasant walk around the island. Several primitive tent campsites are maintained near the runway, as is a Port-o-Potty. The island has no electricity or running water. Fire pits are thoughtfully equipped with cooking utensils and firewood. At one end of the runway, there’s a large mailbox filled with emergency supplies: a first aid kit, water, some packages of Raman noodles and other items that visitors have contributed.

In the preceding weeks, preflight planning included a varying list of cargo. Emergency gear, tent, sleeping bags and food were considered, in the event that they were grounded somewhere because of bad weather or worse, a broken airplane. Ultimately, weight considerations and the fact that the weather was perfect, the decision was made to bring only some snacks, water and spare clothing.

The flight was planned as a kind of scouting trip, an interesting spot to be checked-out and maybe bring the family to sometime. Intended as a simple there-and-back one day flight, Justin nevertheless shared the details with several friends just in case. 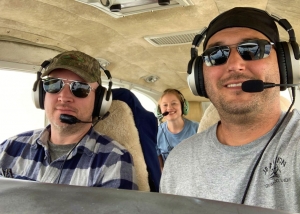 Their route skirted the Wisconsin coastline northward, adding seven minutes to a more direct route. Near Manitowoc, they turned northeast, leaving the coast behind, and headed for the island. From the air, the view of the surrounding waters was reminiscent of the Bahamas.

Thinking that it would be best to overfly North Fox’s runway and check on its condition, they found the runway to be hidden among ancient birch and pine trees. They didn’t spot the runway until the Aztec was nearly lined up with it. During the low pass, they were surprised to see several airplanes parked nearby.

At the Aztec’s airspeed of around 185 knots, the total flight time was just an hour and twenty minutes.

After landing landing, the trio spoke with some of the folks who had arrived earlier and learned that a flight of 99s from Chicago Executive were headed in for the day. Justin said, “I didn’t realize just how small the GA world is until I was on an island in the middle of nowhere and heard someone called out, “Hey, aren’t you that guy from Galt Airport?”

They took some time to check out some of the trails and shoreline. It was enough to make them wish they had arrived earlier in the day so they would have had the time to hike more of the trails and cook out before heading back. But the time had come to depart. The weather for the return flight was perfect and the they arrived back at Galt by 5:00pm.

Justin says, “I can’t wait to go back!” And, he noted, “North Fox Island would be a great fly-out destination.”

If you would like to add it to your own bucket list, just contact Justin. He’d be happy to tell you all about it and show you his pictures!