Our board met for a regular business meeting on March 15th.  Minutes from the meeting are available from chapter secretary Paul Sedlacek.  We’ve been working hard to come up with some good activities for the coming months.  Keep an eye on our chapter website during the next few weeks for the latest updates. As always, membership at large is welcome to attend our business meetings on the third Thursday of every month at 6:30pm in the Galt FBO.  Your input and suggestions are very welcomed!

One of our biggest events just around the corner is Barnstormer’s Day on June 16th.  We have a good footprint from last year’s event to run this event successfully provided mother nature gives us nice weather.  A key component for this event to run smooth is a good force of volunteers.  As the event approaches, we will be reaching out to our membership to help out. Please consider setting aside a little bit of time to help out if you can.  It is a fun event to work at as well as enjoy with your family.

As April kicks in we will have a regular chapter gathering on Saturday, April 14th.  Our program guest speaker will be Major Jim Welsch from the Civil Air Patrol.  Major Welsch will speak to us about what transpires when the Civil Air Patrol launches a search and rescue mission for a missing or downed aircraft.

I hope everyone has a good month.  Thanks to all for making EAA Chapter 932 and Galt Airport a great community of people.  Fly safe! 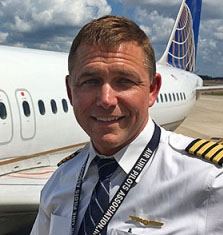 Arnie’s son, Thomas, had the opportunity to accompany his dad on a recent flight to Hawaii, where they toured Pearl Harbor together. Thomas is pictured here at the unique outdoor terminal at Kona Keahole Airport awaiting boarding of a Hawaiian Air Boeing 717 for a flight to Honolulu. We hope you enjoyed the trip, Thomas! 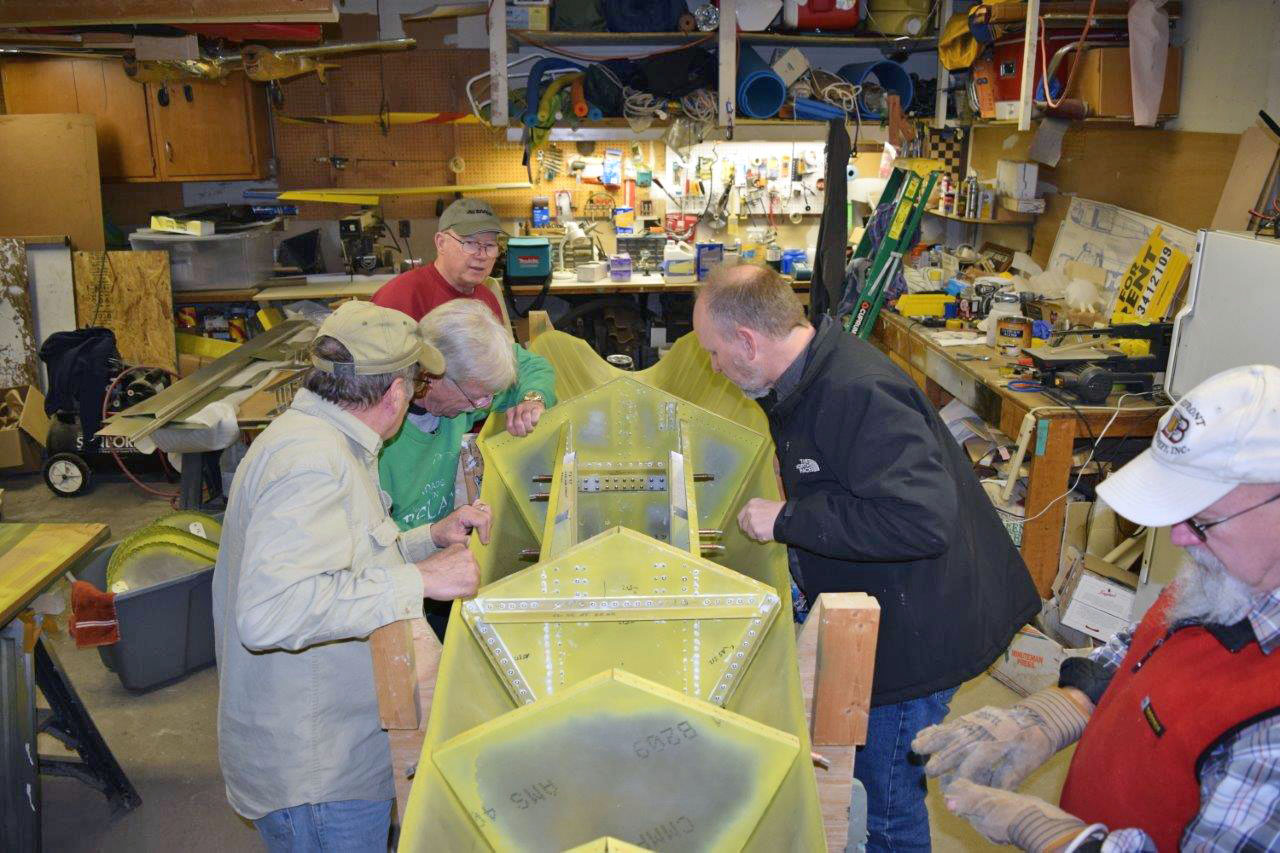 On Tuesday evening, March 27, Don Johnson opened up his home workshop to show us his float construction project. With the first float nearly finished, he was hoping to get some capable hands to help get the second one underway. The completed set will be installed on his experimental Rans. Dan, a CFI with over 4,000 hours on floats, spent three years flying float planes in Alaska after he retired.

Click the link for more photos of Dan’s project:
https://eaa932.org/gallery/dan-johnsons-floats-project/

What’s this Light Sport or LSA hype all about? It’s a question that many pilots with a PPL certificate or higher may be asking themselves. Many general aviation pilots may not care about Light Sport Aircraft (LSA), but the truth is more and more LSA’s are hitting the market and being seen in the skies and at local airports.
In 2004, the FAA created sport pilot/light-sport aircraft (SP/LSA) regulations, which was the most significant change in FAA regulations in 50 years. It allows easier and lower-cost access for those wishing to take to the sky and experience the joy of flight.

Thanks to the efforts of the EAA to persuade the FAA to create these regulation, flying has become less expensive and easier. You can become a sport pilot with as few as 20 hours of instruction. You can fly a one- or two-seat aircraft capable of speeds up to 138 mph. And you can pass the medical requirements just by having a valid driver’s license.

A few other benefits of a Sport License or LSA are:
• Build an approved light-sport aircraft kit that may be as much as 99% complete from the factory.
• Fly interesting alternative aircraft such as powered parachutes, weight shift-controlled (trikes), gliders, gyroplanes, or balloons.

Naturally, anyone wishing to fly as a sport pilot has to operate within certain guidelines. A click on the Light-Sport Aircraft section of the EAA’s website offers clear explanations of the features and limitations of an LSA and what it takes to qualify as a sport pilot, whether you’re new to flying or hope to continue flying without the need for a third-class medical. https://www.eaa.org/en/eaa/aviation-communities-and-interests/light-sport-aircraft

BasicMed goes into effect on May 1

Aviation medical reform is nearly complete. Many pilots may be waiting to qualify. Most need only to fulfill the requirement for an online evaluation every two years (free from AOPA) plus needing to see a doctor every four. If they did not earn a third class medical in the last 10 years, they must get that out of the way first. This is potentially a big problem, as many may have let their medical lapse for various reasons. The good news is that LSAs trigger no such requirement.

Some pilots will be able to acquire airplanes from the used GA fleet at low cost or continue to fly the one they already own or rent. However, the appeal remains strong for a new LSA at an affordable price or a used LSA at a reduced cost. These aircraft often feature modern fuel-efficient engines, highly sophisticated equipment and low operating costs with performance to match many GA airplanes, albeit with two seats.

The ‘hoops’ put in by the FAA with BasicMed make it anything but simple. There are still checks, and evaluations that make this far more complex than the LSA requirements. Skeptics say that BasicMed is actually worse than what they have at the moment. Some physicians will be unsure of what is really required and perhaps be reluctant to sign off on a certificate that they know so little about. Will doctors unfamiliar with aviation be willing to sign off for aviation medicals? Will they be willing to take on the responsibility for this in light of the legal response, if it should occur that a pilot has a medical issue while flying after seeing a regular doctor. Time will tell.

Until those questions are answered, it would seem that the LSA rule is better and far less complicated! 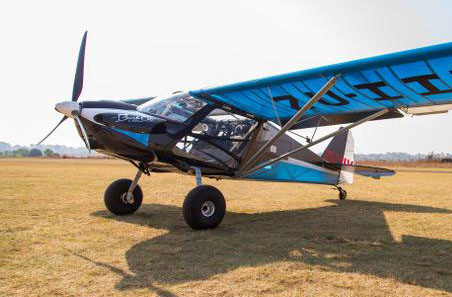 AeroSport, based at Galt Airport (10C), is the U.S. Distributorship for the BushCat Light Sport aircraft, a backcountry, high-wing LSA bush plane with one of the lower price-points in the LSA market. It has the benefits of ease of maintenance, very low operating costs and above all, is incredibly fun to fly! AeroSport is also a dealer for the Sling LSA. A low-wing LSA, the Sling is a more sleek cruiser aircraft.  Both of these LSAs are available for rental and for light sport instruction at Galt Airport through JB Aviation at (815) 648-2433.

The EAA headquarters staff came up with the idea of asking chapters to build Adirondack chairs for a socializing area at the Blue Barn, the Chapter/Young Eagles building on the AirVenture grounds.

Several members of Chapter 932 have jumped in to help with the Adirondack Chair Project. After two building sessions to date, we have framed up both chairs and are now working on the decorative embellishments. We will get word out on our next work party very soon! 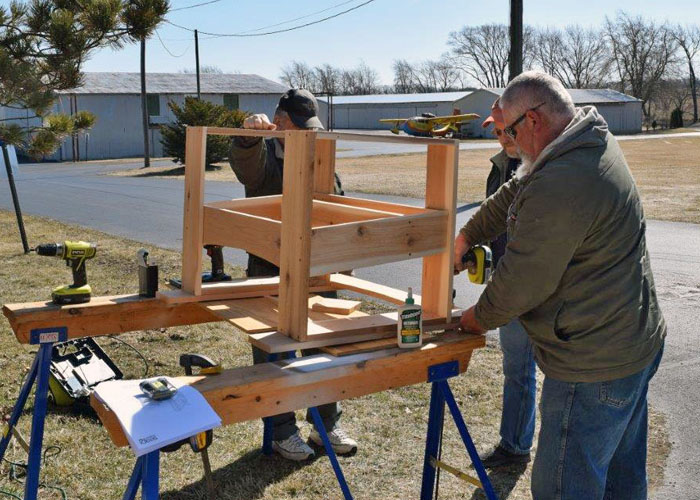 If you haven’t stopped by 10C since the first of the year, you’ll probably notice some changes. Justin and Brian have kept busy during this slow time at the airport by remodeling the second floor of the FBO building which Justin has been using as his office. The second level has been placed on a pivot, created from a repurposed shaft from a Wright R-3350 Duplex-Cyclone radial engine. With the entire upper floor now rotating freely, the roof was converted into a large orange wind tetrahedron. Pilots flying into Galt have commented favorably, as the airport is now easily spotted from 10 miles out. The only drawback noted is on occasional gusty days, when Justin can suddenly find himself sitting across the room from where his desk is. Happy April 1st to all. 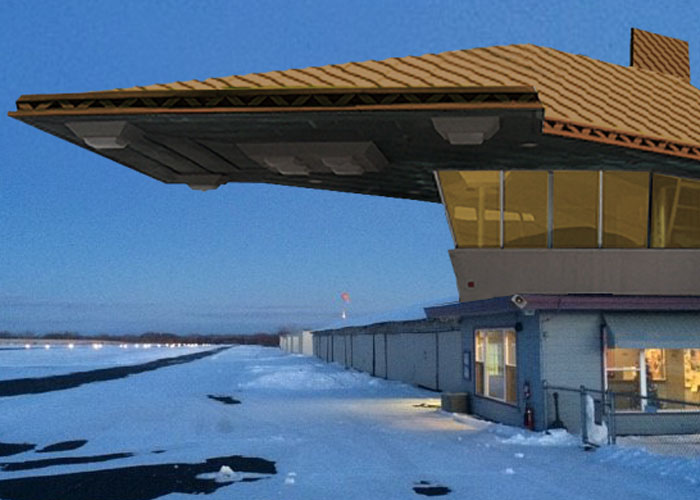 At our most recent EAA Chapter 932 Gathering, we were pleased to host Mr. Pat Weeden, the Executive Director of the Kelch Aviation Museum at the historic Brodhead Airport in Wisconsin. The museum is planning a new facility to house its collection of vintage aircraft, cars and archives from the Golden Age of Aviation.

Al Kelch was a pioneer in the manufacturing of industrial plastics. Among his many innovations was the process for manufacturing 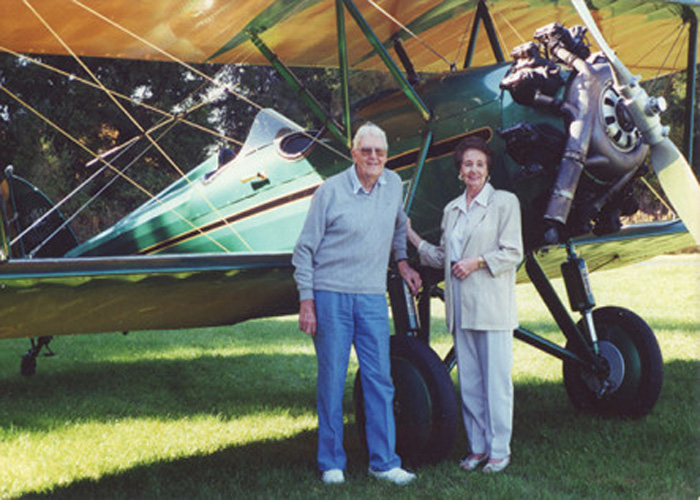 the ubiquitous orange traffic cone. Success allowed Al to follow his passions for historic airplanes, boats and automobiles, collecting and restoring dozens of aircraft including a number of rare examples.

Al was a founding member of the EAA Antique/Classic division and the editor of “Vintage Airplane”, the division’s magazine. In 2003, Mr. Kelch was inducted into the EAA’s Vintage Aircraft Association Hall of Fame. After his death, the entire collection was placed into a trust, along with funds to establish a permanent home for the vintage aircraft.

In April of 2015, the Kelch Aviation Museum, Inc. purchased several acres adjacent to the Brodhead Airport where they intend to build year-round museum facilities that will be open to the public so everyone can experience this fine collection of aircraft.

Brodhead Airport has a reputation as being one of the finest grass airports in the Midwest and is also home to EAA Chapter 431 (www.eaa431.org). It hosts a number of fly-in events each year including a chili-ski fly-in during the winter, a pancake breakfast in May,  and a three-day gathering of the Midwest Antique Airplane Club in September. The national Pietenpol, Hatz and Bleriot clubs also hold a joint three-day gathering at Brodhead each July. Not surprisingly, the airport, currently home to nearly 75 aircraft in various stages of construction, restoration or in active airworthy condition, is recognized for its commitment to restoring and demonstrating vintage aircraft from the period between WWI and WWII. 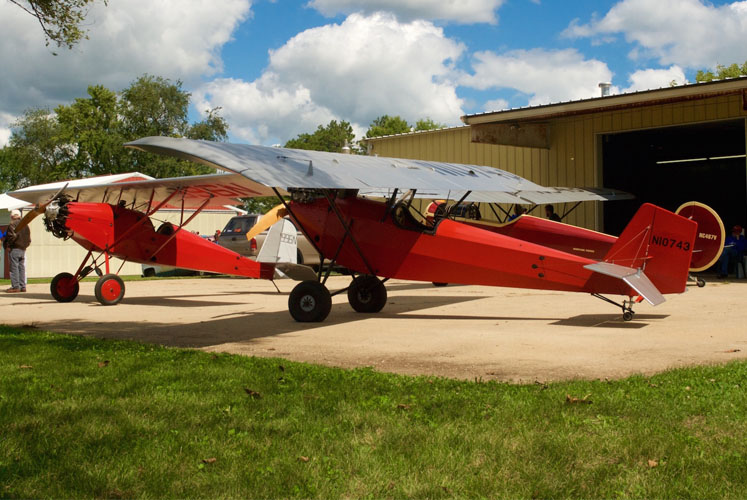 In addition to aircraft, Brodhead Airport is home to one of the few remaining Airway Beacon Towers that were used as visual navigation to guide pilots flying between Chicago’s Midway Airport and St. Paul.

To learn more about the Kelch Aviation Museum and Brodhead Airport, click your way over to www.kelchmuseum.org. Be sure to move through their news pages to see a number of articles and photos on many of the vintage aircraft you’re likely to see in their skies! 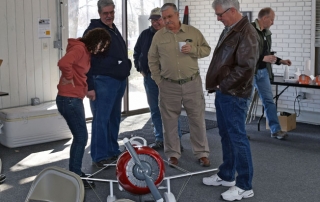 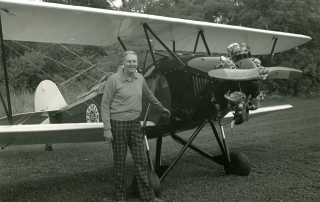 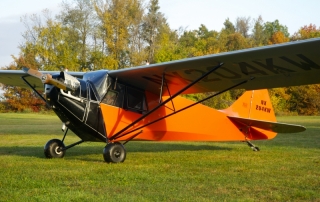 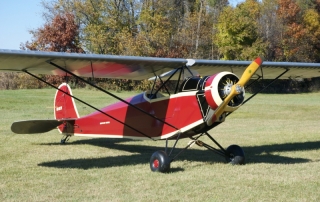 Save the Date! Barnstormer’s Day 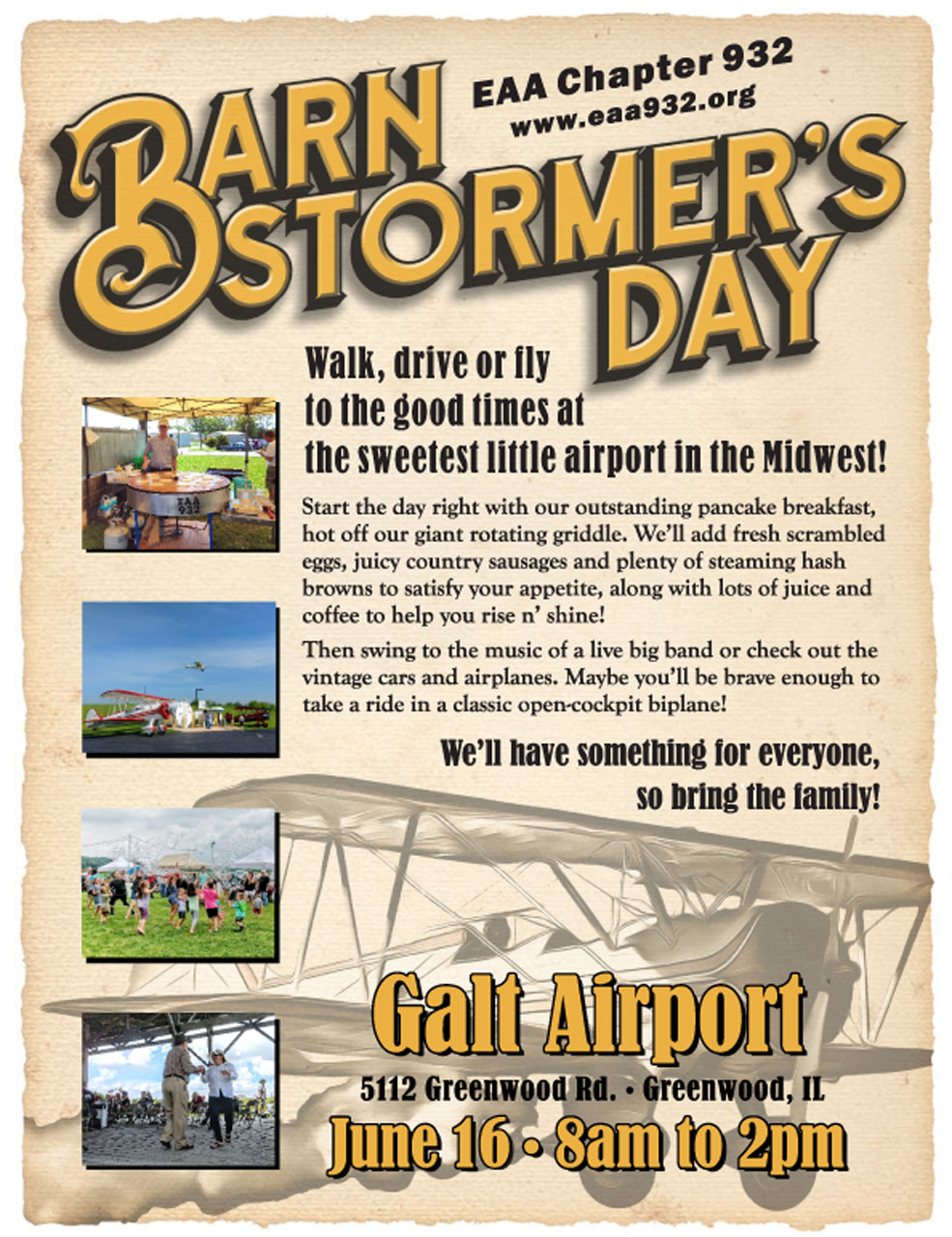