In his capacity as the AOPA’s Great Lakes Ambassador, Andy covers six states…in the air when he can, and on the ground when he has to.

On this particular Saturday, Andy woke at 4AM in Appleton, WI and, in spite of the wind and snow that kept our chapter attendance low, he made the 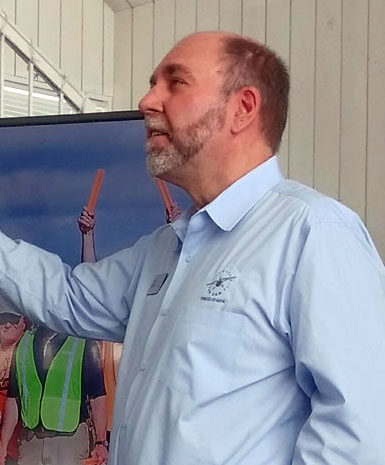 3 hour drive down to Galt to give us an update on the current state of General Aviation. The man shows some serious dedication!

Andy’s outlook is expressed by his attitude and message: that there is a lot of good news in the aviation world today.

“In my association with aviation, which is going on 25 years now, I don’t remember seeing as much positive news.”

Some of the major items that AOPA has taken the lead on are described below. Click on the links that follow each topic’s paragraph to open a new window where you can find more information.

Among the topics discussed was Third Class Medical Reform, what the FAA now refers to as BasicMed which took effect on May 1, 2017. Andy reported that over 27,000 pilots have taken advantage of the new guidelines. These are pilots who previously would have been kept from flying due to medical issues and the prohibitive costs of required annual medical tests. Since taking effect, there hasn’t been a single instance of any participating pilot having an accident due to medical incapacitation. For those interested in advantages of BasicMed, both the AOPA and Mayo Clinic have free on-line tools to help pilots learn about and operate under the new regulations.  https://www.aopa.org/advocacy/pilots/medical/fit-to-fly-pilots  and  https://basicmed.mayo.edu/ 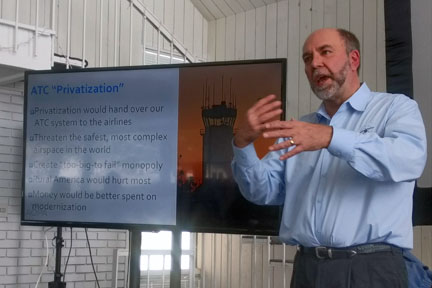 Also, the subject of ATC Privatization has popped back into the news with President Trump’s proposed budget. The AOPA has been working closely with the EAA and with members of Congress to insure that the opinions of private pilots are heard in Washington.

“You and I, as American taxpayers, have invested a huge amount of money into the air traffic control system.”

Privatization could have a serious negative impact on general aviation. It’s a topic that is worthy of our close attention.   https://www.aopa.org/news-and-media/all-news/2017/june/29/take-a-stand-against-atc-privatization

Andy explained the FAA’s recent Compliance Policy. Previously, the FAA only had an Enforcement Policy which spelled out how you were going to be punished if you did something wrong. Any breach of the rules was viewed as a serious violation that could you with a suspended or revoked pilot’s certificate. The new protocol takes a less heavy-handed, more common sense approach when inadvertent infractions of the FARs occur. If you make a simple error for any number of reasons, the FAA can now choose to require remedial training rather than a more rigid enforcement action.   https://www.aopa.org/news-and-media/all-news/2016/february/pilot/counsel

While fully recognizing that FBOs need to be sustainable businesses, the AOPA has gone after the small number of them that abuse the privilege. UGN was one of those, charging outrageous fees to use what is a 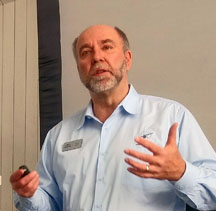 public facility. “The issue here is fairness. Signature did not build the Waukegan National Airport. You and I did, and evey other American taxpayer.” Through pressure applied to the FAA by the AOPA, Signature Flight Support, the FBO at Waukegan National Airport changed their egregious fee structures.    https://www.aopa.org/news-and-media/all-news/2017/march/30/aopa-battling-excessive-fbo-fees

“The bottom line on this is that you, as pilots, have rights.”

After 10 years of planning and research, unleaded replacements for standard AvGas are scheduled to become a requirement. At the end of 2018, airports will be required to stop selling leaded fuels. The good news is that several viable formulations are already available. The even better news is that they may prove to be less expensive! While the logistics of clearing storage tanks and getting shipments of the new gas may cause some headaches for airports, the change-over for pilots is expected to be a non-event. Old and the new formulations are compatible and will not require any changes within the GA fleet. However, owners of aircraft with more unique engines, like warbirds and antique aircraft that may require leaded fuels are in for a more difficult time. Not surprisingly, the EAA is spearheading methods of resolving these challenges.  https://www.eaa.org/en/eaa/aviation-advocacy-and-safety/aviation_advocacy/top-aviation-issues/unleaded-fuel  and  https://www.aopa.org/news-and-media/all-news/2017/july/27/swift-fuels-expands-unleaded-avgas-distribution-network

In other good news, Andy offered all pilots his congratulations on the decreased accident rate over the past few years. The AOPA Air Safety Institute (ASI), funded through contributions to the AOPA Foundation, deserves considerable credit for the reduced rate. They have been producing free live programs, on-line courses and videos to help pilots fly safer for many years. These may be accessed by clicking:  https://www.aopa.org/training-and-safety/air-safety-institute

Some sobering news: the number of certificated pilots continued its dramatic decline, with more than a 25% drop since 1980. Even worse is the news about new pilots: 50,458 Private Pilot Certificates were issued in 1980. Last year, there were just 14,202.

Andy described the impact that the EAA, AOPA, flying clubs and high schools can have. We can be instrumental by involving young people in aviation, as evidenced by our own hosting and participation in local Young Eagles events. The AOPA is developing a full, 4-year aviation STEM (Science, Technology, Engineering and Mathematics) curriculum to be offered to high schools across the U.S. at no cost. In addition, they currently provide high-school Flight Training Scholarships amounting to a quarter-million dollars.   http://youcanfly.aopa.org/high-school 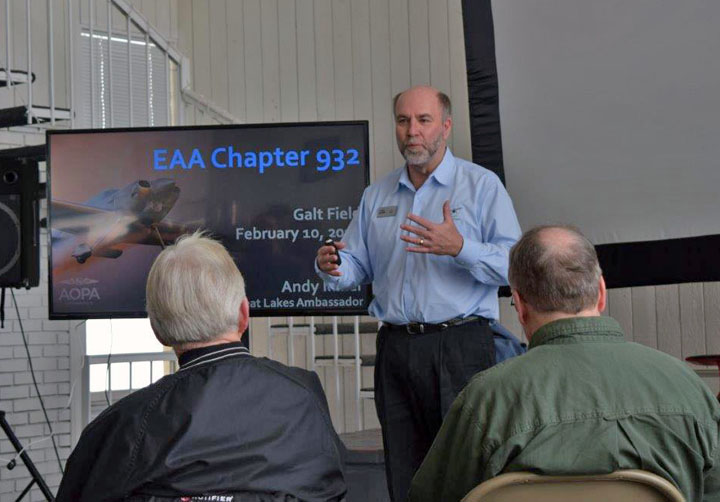 They also offer support to flight schools thru on-line surveys that help point out strengths and define areas of potential weakness. The annual AOPA Flight Training Experience Awards are presented to flight schools and CFIs that earn outstanding “report cards” as determined through the surveys.   https://www.aopa.org/news-and-media/all-news/2017/december/pilot/ycf-flight-training-experience-award

If you are a rusty pilot who would like to get back to flying from the left seat, then the AOPA has just what you need. While job changes, family needs or medical issues may have caused you to take a break from flying, the AOPA’s Rusty Pilots Resource Guide offers all the information needed to help you get current.   https://www.aopa.org/training-and-safety/lapsed-pilots/rusty-pilots

This year, the AOPA will be hosting a number of two-day fly-ins in various regions of the country, presenting their positive message about the future of General Aviation. Workshops, seminars and a chance to connect with other enthusiasts offer the chance to learn, experience and explore all things aviation. Check out the schedule at:  https://www.aopa.org/community/events/aopa-fly-ins/2018-aopa-fly-ins.

Back when the EAA and AOPA were much younger organizations, some of us remember a kind of competition that existed between them. Today, with leadership changes and maturing attitudes on both sides, there is a recognition that we need each other’s talents, energy and expertise. The fact is that over 80% of EAA members are also AOPA members. Both organizations are working with us and for us, toward goals that are mutually beneficial.

In Andy Miller, we’ve found not only a fellow EAAer, but also a friend at the AOPA.

We’re pleased to have you, Andy! 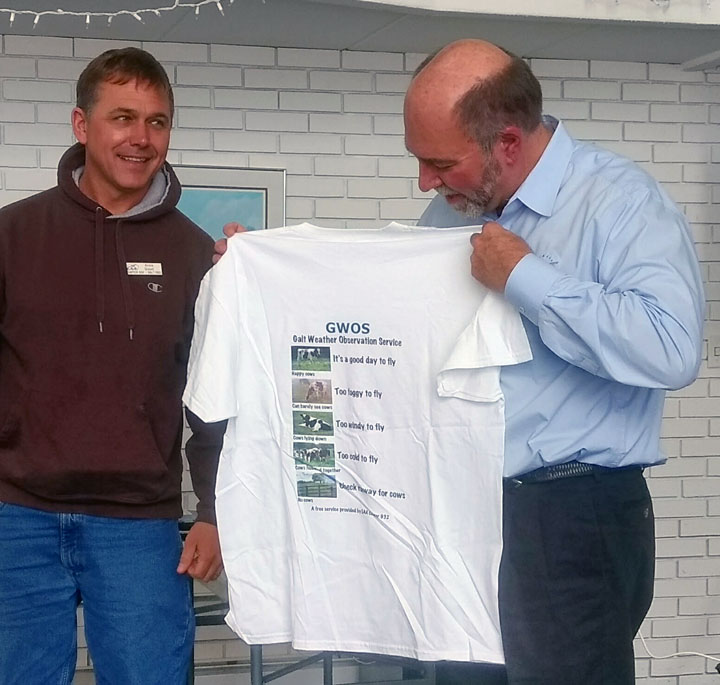