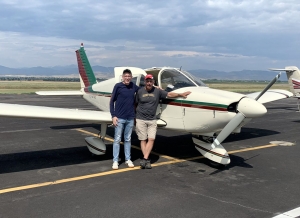 When Arnie Quast, President of EAA Chapter 932, first asked JT if he might like to come along on a cross-country flight to Colorado, JT hesitated – for a fraction of a second. JT, aka Justin Thuma, recipient of the first Ed Moricoli Memorial Scholarship and Treasurer of EAA 932, replied, “Heck, yeah!” and then checked his schedule.
The flight, which took place immediately after this year’s AirVenture, was in a 1967 Cherokee 180 belonging to long-time Chapter member Larry Schubert. Larry and his wife recently moved to Fort Collins, Colorado.
That Cherokee, affectionately called Lucy, is an airplane that Arnie and Justin know well. Between Larry and Arnie, Lucy has flown over 300 Young Eagles. It was Arnie who gave JT his first ride in it when he was 13 years old.
Larry was at a point in the move where he needed to find a good way to get his airplane to its new home. One day, while discussing the problem, Arnie suggested that he could ferry the plane to Colorado. From a practical standpoint, a flight like that wouldn’t be unusual. Larry agreed. A few days later, Arnie asked JT. 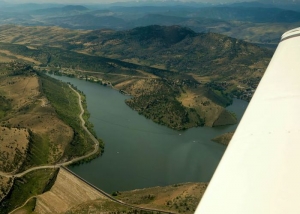 Arnie and JT did some basic kitchen table planning, Arnie plotting out the route on paper sectionals and JT using ForeFlight. Both say they learned a good deal from the other. Originally, Arnie thought about taking a more northern route through the Dakotas, making a longer but more interesting trip out of it. However, timing dictated otherwise. Instead, the flight plan was what Arnie referred to as a pretty vanilla route, directly West, straight across Iowa, Nebraska into Colorado. Justin suggests, with a grin, that it may qualify as the world’s most boring trip, second only to driving the same route.
As launch day approached, Arnie watched the prog charts for weather.

The pair had planned to take off at dawn, but a front was moving through keeping them on the ground until 11:30AM. Finally, the Cherokee lifted off and they pointed the nose west, with thunderstorms exploding behind them over O’Hare.
As they approached the Mississippi, the ceiling lifted. Dubuque was off the right, then Cedar Rapids to the left, followed by DesMoines. They were making 85 kph. Arnie’s wife had packed sandwiches which, JT says, provided great “in-flight meals.” 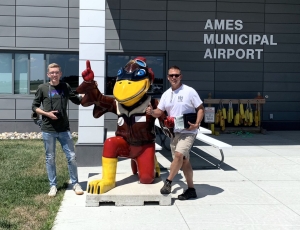 After 2.5 hours in the air, they agreed that it was a good time to refuel. Distance and reasonable gas prices pointed to Ames as a good first stop. They refueled and took off, flying on past Omaha.
The afternoon stretched into a warm, somewhat bumpy flight. When Arnie spotted Wahoo Municipal Airport on the sectional, the decision was made to stop, take a break and see what was there. Arnie remembers that gas was inexpensive but the pumps were a puzzle to figure out. They added fuel, took some pictures and headed west again, this time climbing into cooler, more comfortable air.
Cruising at 8500 feet, they pushed on to North Platt where they would spend the night. There they found the FBO, Trego/Dugan Aviation to be very friendly. Arnie and Justin were able to hangar the Cherokee, grab a steak dinner at a local bar and enjoy a restful night at the local Hampton Inn.
The next morning, it was on to Colorado. They made a beeline for Fort Collins where Larry Schubert was waiting to introduce Lucy to her new hangar. 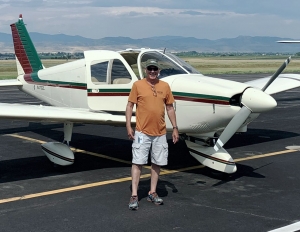 The return flight was in what they described as true, first-class comfort aboard a SkyWest Embraer E175. Unfortunately, it wasn’t a direct flight into Galt, but they did get a nice tour of the cockpit!
Cross-country take-aways:
-Flight plans were filed through Leidos.
-Good cell coverage was found during the entire flight.
-The team made good use of Flight Following during the entire trip. They took off and contacted Rockford Approach, who, a short time later, passed them on to Chicago Center who tracked them beyond their stop in Ames, IA. Minneapolis Center then provide service almost to North Platt, where they were handed off to Denver Center. Arnie said that requesting Flight Following was super simple using the basic 3 W’s: Who you are, Where you are, and What you want to do.
-Once beyond Illinois, there was very little radio traffic until they reached Colorado.
-Arnie noted the need to lean the engine before takeoff at higher altitude airports to obtain maximum rpm.
-Total flight time was 8.8 hours. Total trip time was 24 hours.
-There were no surprises from Lucy or the weather