On Saturday July 16th Chapter 932 had a flyout scheduled to Washington Island, WI. We planned to attend the Lion’s Club annual fish boil. George and Wendy Richardson were the only chapter members that made the event because they left Galt a day early.  Due to low IFR conditions across southern and central Wisconsin on Saturday morning, the rest of us, unfortunately, could not make the flight.  Here is George’s recap of the flyout.

The Lions Club definitely knew what they were doing for their annual Fly-in / Fish Boil. It was too bad that IFR weather across much of Central Wisconsin kept lots of planes away, but it was bright and sunny at Washington Island.  I ran into one pilot who flew IFR from DuPage and cancelled when he hit the sunshine, but most I ran into were from northern Wisconsin and Michigan.  About 50 planes flew in, and that was much of the entertainment for the folks who drove. Local pilots explained to me that the 2200’ runways are effectively much longer, and the “runout” distance at each end is hundreds of feet of excellent grass that used to be runway until the FAA shortened the markers in their last measurement. He said everyone starts their takeoff run hundreds of feet before the markers!

The Lion’s Club is the only service club on the island, with approximately 70 members. They had 4 kettles of fish going with a rip-roaring fire under each. The recipe for the fish boil is putting about 15 pounds of potatoes in the bottom of a stainless-steel basket, then placing a bag of onions on the top, and then adding about 20 pounds of fish.  One guy has a clipboard, and he carefully times each kettle. When I asked to come closer to take some pictures, he said, “OK, stick around for 4 more minutes until the fish is done”, and we will do the “boil over”. It’s not really a boil over – the cook pours about a quart of diesel fuel on the wood fire under the kettle, and then it makes an impressive show!  A lot of folks drove in, and it seemed to be a major event in the area. The island only has 650 full-time residents, but lots more have summer homes there. A few hundred folks come over on the ferry for day. I don’t know if they sold all 700 pounds of whitefish they had ordered in, but attendance seemed very good, and everyone had a great time.  Put this on your list for fly-in’s next year. It is a great flight, and a fun event!

Wendy and I made a weekend out of attending.  We flew up Friday (after playing cards at Galt for 45 minutes to wait out a rain cell).  We rented a cabin, and an ATV to get around the island. We parked our airplane next to a couple from Springfield, IL who have been coming up for 17 years.  They were camping with friends for the weekend. They mentioned that this event is the only time the airport manager allows people to camp on the airport. We noticed 5 tents spread out around the airport. There are nice bathrooms in the airport office building, but you either need to sponge bathe or bring a portable shower.  A bag of water atop a high wing airplane works great!

If you get the chance, Washington Island is a great place to visit for a day or weekend. A company called Island Adventures rents bikes and ATV’s.  The island is about 5 miles across so it’s a bit too much to walk.  Everyone we ran into was very friendly and relaxed. There are restaurants, beaches, museums, and plenty of fresh Wisconsin air to go around!! 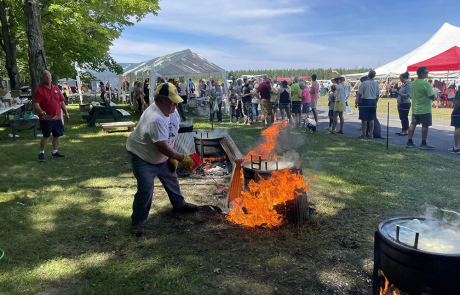 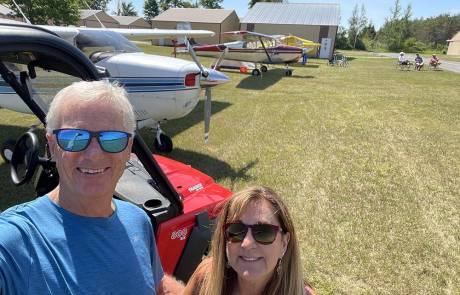