Time to Spare? Go by Air!

Time to Spare? Go by Air! 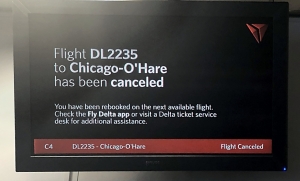 Time to Spare? Go by Air!
The Joys of Business Travel

As a licensed Sport Pilot, I truly enjoy recreation flying at Galt Airport (10C). Usually, I can’t wait to get inside the cockpit and hit the sky. Unfortunately, for some of us, our jobs require that we often fly a less a fun way: commercially.

My work as the Director of Event Operations for an international trade show organizer does take me to some amazing places. However, the destination isn’t always quite so exciting and the very thought of traveling can be exhausting. On those trips, I look forward to making it back home quickly.

However, during a recent trip…someone had other plans for me.

I was required to be in Salt Lake City on a Wednesday evening to attend a conference. I planned to be in town for one night so I could head home Thursday evening after walking the exhibit floor.

I made a final circuit around the exhibit floor. It was afternoon and I was suffering from a painful stiff neck and I’m exhausted. All I wanted to do was go home.

I arrived at my gate early, hoping that my status with United airlines will earn me an upgrade to First Class. Luck, however, has definitely left town, but it certainly didn’t fly out.

Once on board, we pushed away from the gate, only to learn that an engine has a “bad oil pressure seal.” A tug pushed us back to the gate. With no information provided, we were asked to deplane. The gate agents were flooded by passengers trying to make connecting flights. It gradually became apparent that this aircraft wouldn’t be going anywhere.

I was finally able to speak to an agent who suggested that my best bet would be to get rebooked for the first flight to Chicago the next day. The airline would put me up in a hotel and offer a food voucher. At that point, all I wanted was to lay down and get some rest. I’d lose one day of work, but I could live with that.

Then I learned that there were no United flights available for the next day. I would have to rebook on Delta. 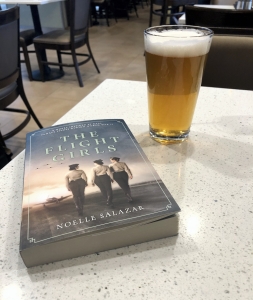 The next morning, I arrive at the airport at 6:00AM, ready for my 7:50AM Delta flight. Still experiencing neck pain, I find a seat in the gate area only to learn that there would be a delay due to weather in Chicago. I know that weather is out of the airline’s hands. I’ll give them that one. Three hours later, we finally boarded.

I got to my seat, (who knew Delta offers Sardine Class?) and, of course, a very large man sits next to me. We finally push back from the gate. Then I notice we are holding short for quite a looong time awaiting take-off. The PA system comes to life and the pilot tells us that the flight attendants smelled fuel or smoke toward the back of the airplane. Back to the gate we go.

This is the second gate return I’ve experienced in 24 hours. Once there, the pilot announces, to no one’s surprise, that we would have to deplane the aircraft for maintenance to be performed.

But, there’s great news: Delta has a spare aircraft in a nearby hangar! We all move to an adjacent gate and board the new airplane.

I locate my new, but still narrow seat and we again push back from the gate. At the very familiar hold short position, we sit…and sit. Once again, the PA clicks on. ATC has informed the pilot to expect a one hour ground delay due to the bad weather in Chicago. We get to return to the gate! That’s my third gate return in 24 hours. I’m starting to feel like I’m stuck in an episode of the Twilight Zone.

At the gate, the pilot first offers passengers the opportunity to deplane. Then, oddly enough, announces that all passengers have to deplane. Once again, I gather my belongings and get off de plane!

Out of nowhere, a push notification from my Delta app notifies me that the flight is canceled. No reason given! Now what? Do I call United Premier to try to work out an alternative plan, or do I stand in line at the Delta gate with the other irate customers?

The thing that irritates the group is that passengers on another flight to Chicago, scheduled to leave after ours from the gate right next to us, are able to board their flight. Why are they not getting cancelled? Is the weather connection between that gate and Chicago somehow better?

Now Delta_has me rebooked on a flight to New York, with a connecting flight to Chicago…all on the same morning. Let’s see…Salt Lake to New York, switch planes, continue on to Chicago, all before noon? What?!?

I stand in line at Delta, on the phone line with United. Why United? At that point, I wasn’t sure who to reach out to. It was United’s mechanical mishap that put me in this position in the first place. The wait for a United agent is 40-50 minutes, but only 10% remains on my cell phone battery – the one trip I failed to bring my powerbank! So, I wait in line at Delta counter.

It’s finally my turn to speak to the Delta agent. I explain the fiasco. The agent very nicely tells me that my chances for a standby seat are slim to none.

However, they will cheerfully put me up in a hotel and rebook me for tomorrow’s flight – at 2PM!__My choice is to drive 6 hours to Vegas and hope for a connection there, or spend another night in lovely Salt Lake.

New problem: I’m out of clothes. Don’t know about you, but my underwear only has two sides. So, I rent a car and go shopping. The closest option: a Walmart Supercenter._With enough clothes to get me through another day, I drive to the Comfort Inn that Delta had comped for me in hopes of getting this day behind me. Foolish me.

Of course I do.

Thankfully, the correct hotel is only five miles away and check in is successful.

I’m starving and head to the nearest restaurant, Lofty’s. Some good points about Lofty’s: first, I get a Fire Dept. discount, and second, it’s aviation themed! I enjoy an ice cold beer and a fancy Wagyu Beef Burger.

Sometime during all the confusion, I actually get a call from a Delta_Customer Service person who is very apologetic and says they would be sending me a check for $100 to make up for my inconvenience. At least it will cover the clothes I had to purchase.

Back at the hotel, I collapsed on the bed, enjoying the light buzz from the craft beer. I’m out for the night. 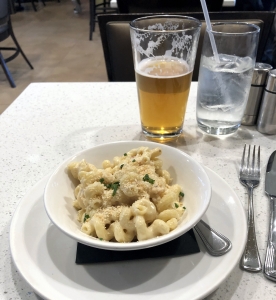 The day begins with the Comfort Suite’s lovely free breakfast of what I suspect is supposed to be eggs and sausage. Then a glance outside tells me that the sky looks anything but friendly. Maybe I should go back to bed. Instead, I take my time getting ready, put on my new clothes. I actually feel somewhat refreshed!

I also feel the need to complain to United, since no phone call, email or text has arrived to apologize for the inconvenience that their maintenance problem on Thursday, (remember Thursday?) has caused me.

To my surprise, several hours later, I actually get a response from United, apologizing for my suddenly miserable life. They say they’ll be looking into it further and offer me a $150 travel certificate. Wow! Now I can dream about all the cities I won’t be able to get to for $150.

I arrived at the airport with my $15 food voucher from Delta. I splurge at the fanciest restaurant in the airport: Cora’s Kitchen. My voucher gets me what appears to be a kid-sized bowl of Cora’s Lobster Mac & Cheese. The 20oz. beer I order is on my nickel.

On the way to the gate, I stopped at the airport book store, anticipating plenty of reading time, but they’re out of War and Peace. I settle for a copy of Flight Girls.

Assigned to seat 18A, I find that the Delta app allows me to switch to an Exit row. Yes! The problem is that my electronic boarding pass won’t appear. Instead, I get a message to “see the Gate agent.” Ugh! I head to an agent who kindly prints my boarding pass. As I walk away, I realize that I’ve been reassigned to a middle seat. I give up. Defeated, I get in line at the gate and board the airplane._

Ah, there’s seat 20E. Some very nice ladies sit to either side. One is slightly too large to allow the armrest to go down, so I’m feeling a little uneven.

Ok, we push back from the gate as I’ve already done 3 times. The suspense is palpable. Will this plane really ever leave the ground? Every weird noise and rattle causes me to tense! I am never anxious at take-off, but I find myself sweating at the thought if the dreaded hold short location! I’m aware I might be starting to scare the ladies on either side of me. Arrgh…I can’t see outside because Window Lady has lowered the shade!

I feel like standing up and pleading, “Hey, can anyone please stream ATC for me? Are we cleared for take-off? For God’s sake, someone, tell me what’s happening!”_