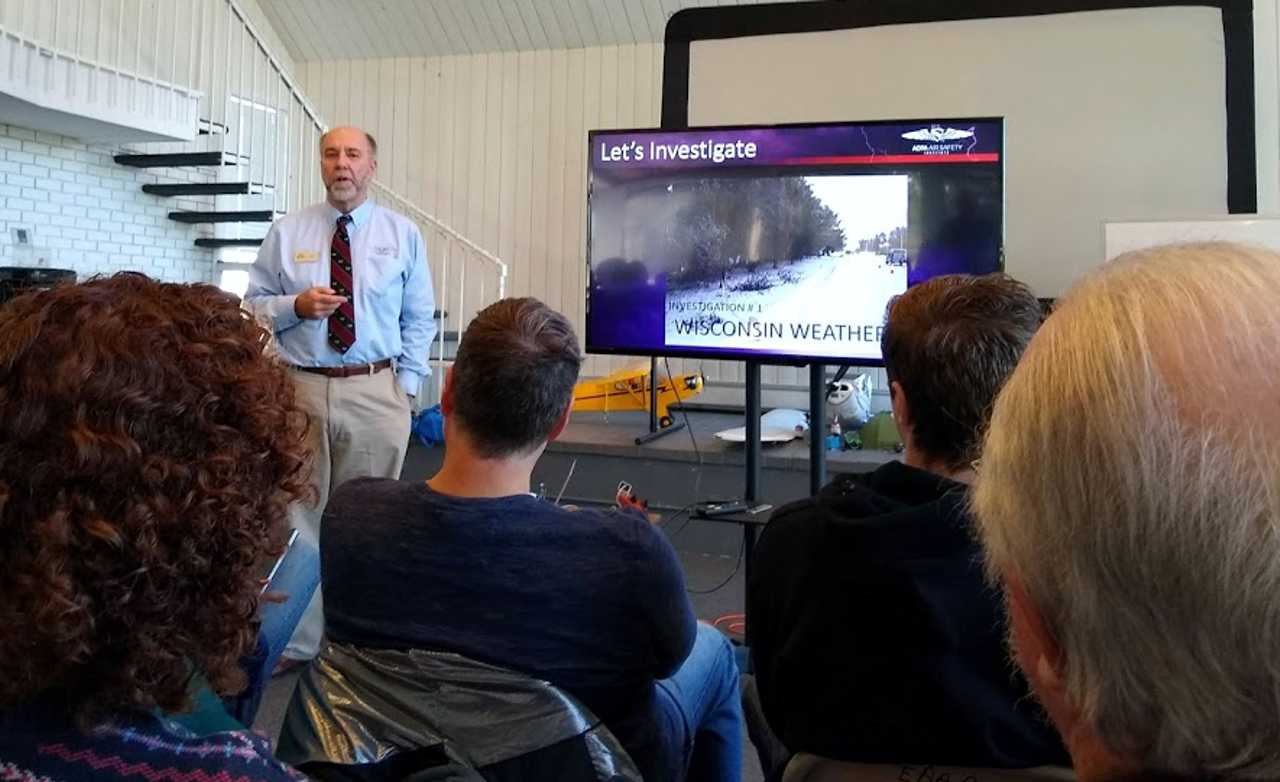 Two months ago, our friend, Andy Miller of the AOPA, reminded us of his appearance at last year’s gathering, when he had to drive in from Appleton and was greeted here at Galt with 18 inches of snow and a handful of attendees!

Fortunately, this year was much more conducive to travel, and everyone felt a whole lot better about showing up at a friendly country airport early on a Saturday morning.

Even better, Andy was able to fly his AOPA-provided “re-imagined” yellow C152 to Galt without a hitch.

Before he began his presentation on “Weather Related Accidents”, Andy noted what we are privileged to have right here: an active aviation community at a supportive airport facility and involved and committed chapter membership. He reminded us that we should appreciate that there are many other chapters out there that struggle to survive.

Andy noted that he was an EAA member long before he became a member of AOPA. EAA’s CEO, Jack Pelton has said, in his case, he was an AOPA member first and EAA member later. The point is that there are no longer tuff battles between the organizations. There is a recognition that the field of aviation is far too small and what we’re all doing is far too important than to be wasting time and resources. The leadership of both groups has directed their staffs to work together for general aviation’s common good.

Andy began his “Let’s Investigate” interactive presentation with a question: “Does weather cause accidents?” While the attendees agreed that it is certainly a factor, it’s really the decisions that a pilot makes that usually create the problem leading to the accident.

As pilots, we have far better weather tools than we’ve ever had before. Instead of pin-fed paper printouts containing only coded meanings and  no pictures, we have amazing tools on our computers at home and at our fingertips when we fly. Tablet apps tell us where the cloud tops are, where turbulence might be expected and when ice is likely. Still, the most dangerous thing we do is to blunder into IMC (Instrument Meteorological Conditions) when flying VFR.

Attitudes may be the biggest factor. Andy recommended giving ourselves the ACID test: Arrogance, Complacency, Ignorance and Distraction.

He noted that any of those elements can get us into IMC trouble very quickly. Once we’re there, things quickly turn deadly. Studies by the U of I Aviation Institute have repeatedly found that an untrained pilot lasts 178 seconds – less than three minutes – before suffering a loss of control (LOC).

Andy also reminded us that LOC can begin before takeoff and after landing. Records show that one-third of all crosswind accidents happen while taxiing!

As pilots, we have an unlimited authority to declare an emergency. What we do not have is the authority, ethical or moral, to place other people’s lives in danger – on the ground or in our aircraft.

As amazing as the tools are that we have at our disposal, we need to be aware of the limitations of technology. It has no ability to protect us from our own arrogance, complacency, ignorance or distractions.

While everyone knows not to drink and fly, and is aware that medications that can affect our decision-making skills and response times, Andy told us that people seldom think about not getting enough sleep before piloting an airplane. As a final thought, Andy informed up that research indicates, “Missing one-half of your normal night’s sleep has the same effect on your cognitive abilities as two alcoholic drinks.” That’s something worth keeping in mind before we climb into the pilot’s seat.

Just don’t let it keep you up at night!