“Flying Over The Pond”  by Arnie Quast

A few months ago I became a new captain on the Boeing 787 Dreamliner.  So far it has been a fun and challenging experience.  Learning a new airplane always takes time, and there is also a learning curve in operating on new routes, and to new destinations.  The genre of flying that I am now doing is quite a bit different. I used to fly domestic flights on the Airbus 320 based in Chicago.  I am still based in Chicago, but my flying adventures now take me to destinations all around the world!  Lately I’ve been flying to a few places in Europe.  Some of the cities I have flown to include London, Paris, Brussels, and Frankfurt.  Airline pilots often refer to trans-Atlantic flying as “flying over the pond”.

Some folks have asked me what it is like to do this sort of flying, and the procedures involved in operating a trans-Atlantic flight.  It is hard for me to explain the intricate details, but I thought I’d lend a brief overview of what a typical flight is like.

First off, the 787 is the leading edge of airliner technology and passenger comfort. My airline operates three versions of the 787 including the 787-8, -9, and -10.  Seating capacity ranges from 253 to 318 seats depending upon the aircraft version.  A typical crew on an international flight will consist of 3 or 4 pilots, and 8 to 10 flight attendants.  For flights of 8-12 hours, there are 3 pilots.  Two pilots fly while one pilot takes a rest.  For flights over 12 hours 4 pilots staff the flight. Two fly, and two rest.  This kind of staffing for a flight is known as an “augmented” crew.  There is a comfortable rest area in a compartment above the first class cabin .  A stairway leads up to two private beds and a rest seat.  In the rear of the aircraft the flight attendants have a rest area with 6 beds available.

In terms of operating the flight, a few things are different about the way the flight is planned.  While flying over land on either side of the ocean, most of the navigation and air traffic control procedures are fairly routine.  Flying over Europe is like flying in the USA.  Various air traffic control sectors control the airspace. Unlike the USA, the language dialect changes quite noticeably as you pass over the various countries in Europe.  English is the language standard for aviation all around the world.  Also many of the airports have some very strict noise abatement procedures along with other contingencies that are a bit different from the USA.  London Heathrow is probably the most notable of all the airports I have been to.

Over the water, some special flight planning comes into play.  The majority of airliners crossing the ocean have two engines nowadays.  If one fails, there are procedures in place to accommodate inflight contingencies.  Obviously, there is no place to immediately land when flying over the “pond”.  Regulations known as Extended-range Twin engine Operational Performance Standards (ETOPS) come into play.  ETOPS procedures are planned if a two-engine aircraft is to fly 60 minutes or more out over the water.  Alternate airports have to be planned within 120, 137, 180 or in some cases 207 minutes from land.  The time to an ETOPS alternate often depends on the weather conditions at the various ETOPS alternates.  Common alternates in the Atlantic Oceanic region between the USA and Europe often include Gander, Goose Bay, Stephenville, St Johns, Keflavik, Lajes, Shannon, Dublin, Prestwick, and Edinburgh to name a few.  ETOPS planning is also used in other parts of the world such as the Pacific Ocean and other areas where extended overwater flying is necessary.  To fly on an ETOPS segment, the aircraft is carefully inspected before each flight.  Maintenance personnel perform an “ETOPS Service Check”.  Critical items such as engine oil quantities and other diagnostic checks are performed prior to the aircraft being released.

People often ask how we communicate with air traffic control out over the water.  While over the Atlantic there are two main air traffic control centers – Gander (Canada), and Shanwick (Ireland).  The demarcation between the two is at 30 degrees west longitude, or “30 west” in pilot lingo.  In the early days of overwater flying, HF radios were the common means to talk with Air Traffic Control. HF frequencies are not “line of sight” frequencies like the VHF frequencies we commonly talk on while flying over land.  The HF signals “bend” with the curvature of the earth, and carry for long distances.  The reception and clarity can be often be marginal at best.  Despite the old technology, HF is still widely used.  An onboard system called Selective Calling or “SELCAL” also works  off of the HF and VHF radios. SELCAL allows air traffic control to send alert messages to an aircraft. Each airplane as a unique four letter SELCAL identifier that we give to ATC as we coast out over the water.   If ATC sends us a SELCAL alert, a chime goes off in the cockpit, and we respond by listening up on the HF frequency they assigned to us as we coasted out.

Over the past 15 years a more modern form of communication called Controller Pilot Datalink Communications (CPDLC) has come about.  CPDLC works off a digital satellite link.  It allows an aircraft to send text-like messages to air traffic control and vice versa.  It makes communication a lot easier to understand.  It also automatically sends aircraft position reports to ATC.

If all else fails, our airplanes are equipped with a satellite phone system called SATCOM.  It allows one to make a phone call to ATC and dispatchers.  Additionally while out over the water, we tune  VHF radios to frequencies 123.45 and 121.5.  On 123.45 we will often chatter with other aircraft that are in our area out over the ocean.  We often share ride reports and other pertinent information.  Sometimes we relay information for other airplanes over these frequencies.

There is a lot of traffic that transits the Atlantic on a daily basis.  To keep the traffic flowing smooth and properly spaced, both Gander and Shanwick ATC control centers build oceanic “tracks” called the North Atlantic Organized Track System (OTS)  for managing east and westbound aircraft every day. The tracks shift north and south based on prevailing winds and weather forecasts.  Typically weather is quite stable over the ocean, but upper level winds and turbulence can be quite strong, especially during winter months.  The eastbound tracks typically try to take advantage of prevailing tailwinds from the west.  Westbound tracks usually attempt to avoid headwinds when flying back to the USA.   The track waypoints are built on cardinal lines of longitude such as 10 degrees west, along with 20, 30, 40, and 50 west.  The tracks will shift north and south in degrees latitude.  As mentioned earlier, the demarcation between Gander and Shanwick  ATC centers is at 30 degrees west.  In order to operate on the tracks, an aircraft procures a clearance from ATC approximately 30-90 minutes prior to “coasting out”. Each track has an entry and exit waypoint fix that is confirmed with ATC in the clearance.  We usually get this clearance via CPDLC.  On certain days an airline might not want to operate on one of the organized tracks for some specific reason. If that is the case, the airline can file a “random route”.  The random route is a unique set of waypoints defining the oceanic route.

The world is truly a small place with modern day air travel.  A typical flight time to destinations in Europe is about 7 to 9 hours from Chicago depending on winds and the actual destination. This was just a quick overview of “Flying over the Pond”. I have had previous experience with this kind of flying earlier in my career while I was a First Officer on the Boeing 767 and 777. I am enjoying my new position on the Dreamliner. Being in command of a totally cool airplane on some fun city pairs has provided a neat change of pace in my career. 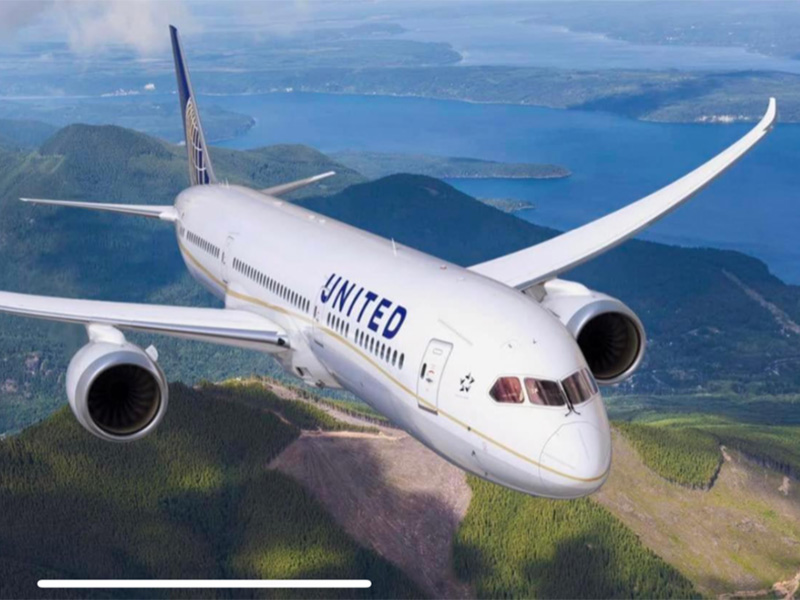 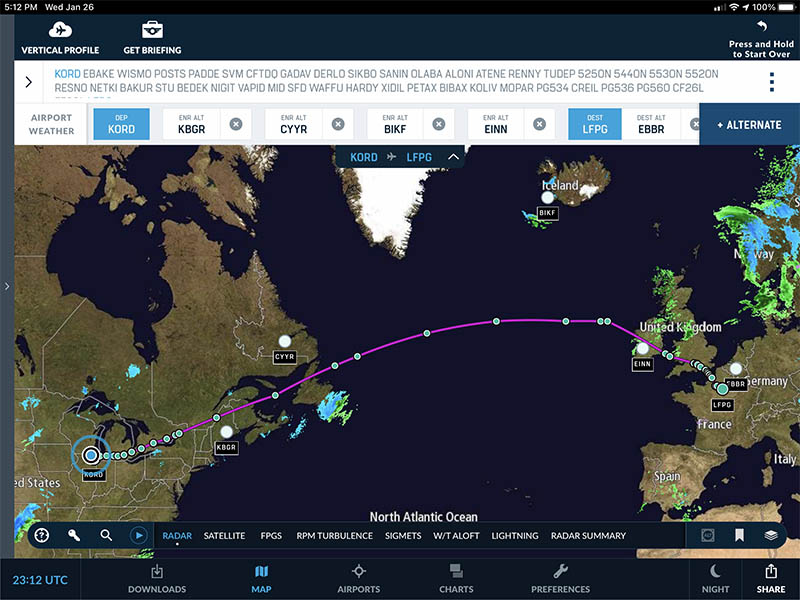