Flying was deep rooted in my family. Growing up my family owned a Piper Tri-Pacer, and my uncle trained pilots in P-38 Lightning’s during World War II. I had steady access to the Tri-Pacer, and I enjoyed learning to fly in it. I took lessons during summer breaks from college at the University of Illinois. My Dad graciously provided the airplane and the gas, and I only had to pay for an instructor. What a deal! I soloed in only 4 hours in back 1974, then achieved my license in June, 1975.

My parents were very active in the International Flying Farmers, and that took them on a lot of great trips all over the United States and Canada. In 1989, my Dad bought a Cessna 182 to go farther and faster, and have almost unlimited carrying capacity, and I checked out in that right away. My brother, Robert, whom I farm with, is also a pilot, and in 1990 we both decided to get our IFR rating. One of us would ride in the back and watch while the other flew with the instructor, then we would land for lunch and switch places. We both passed our instrument ratings in 1991, and kept current for a long time acting as safety pilot for each other. Most of my trips in the 1990’s were in the Midwest – a lot to visit our kids in college. Oh yeah – and by 2003, I was divorced, and remarried a few years later to Wendy, who loves to fly, and is a very competent co-pilot!

In 2005, my parents sold the 182 to my brother and me for a nicely discounted price. Robert and I also bought a Cessna 150 for our kids to learn to fly in – and three of them completed their license! We started taking longer trips – and Robert started taking trips to the Bahamas every winter for a month and he really wanted a C-210 which had more range and endurance. In 2010, Robert and I bought our current plane, a Cessna 210, N2233S (non-turbo). It’s a bit much for the farm strip, so we kept it at Westosha, and then moved to Hangar H2 at Galt a few years ago, and we love it here!

My wife Wendy and I love to form our vacations and business trips around flying, and have been to the east coast, west coast, Baja, Mexico, the Bahamas, and many others. We love that in 2-3 hours we are in a totally different area – Nashville, Eureka Springs AR, Kansas City, and in just a few more hours Maine, NH, Boston, Florida… What a great way to travel! The 210 is such a nice stable platform to fly, and with ADS-B requirements, we put in a very nice panel – a Garmin 750, 650, 345 transponder, and a Garmin 696 on “Wendy’s side” for another weather source, XM radio, and data that Wendy can pull up without “messing up” my 750 map! I’m just over 1500 hours now and look forward to many more years of flying around the country! 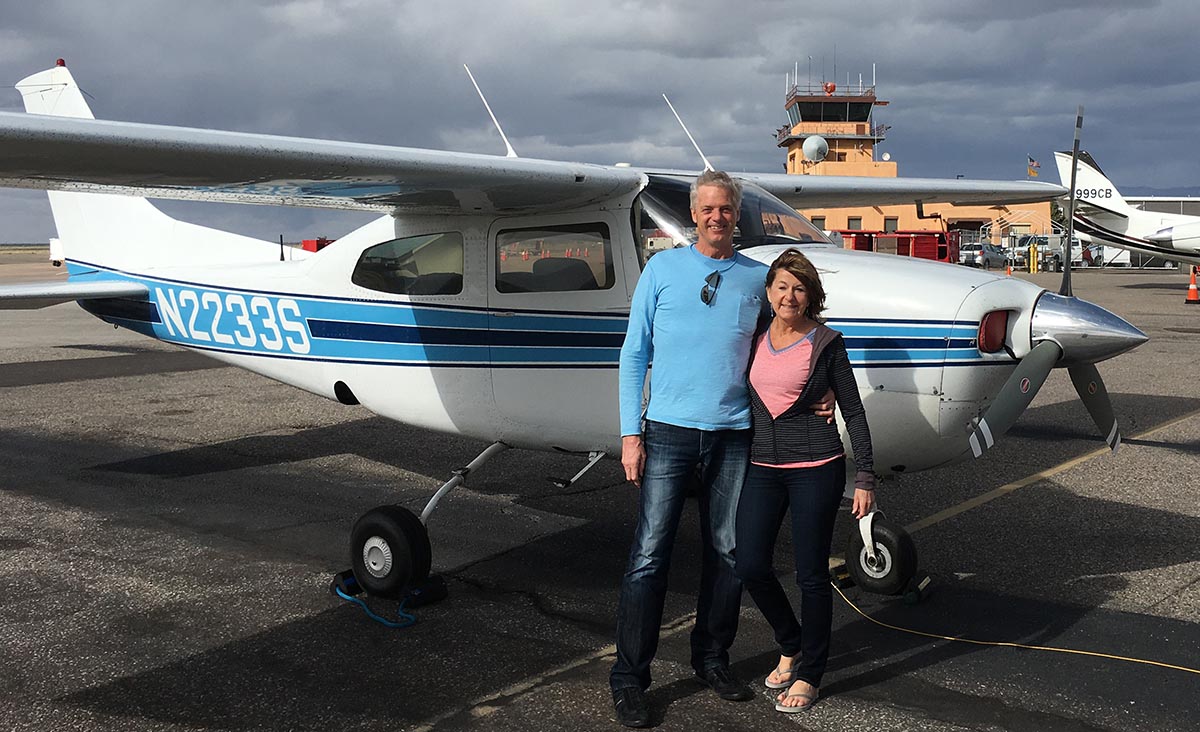 – George and Wendy Richardson co-own the popular Richardson Farm with their family in nearby Spring Grove, IL. The farm is the home of the corn maze that we all love to fly over – especially during our EAA 932 Young Eagles rallies!