Cogitations from the Editor

We were at 2,800 MSL over southern Wisconsin when my passenger had a heart attack. I never felt more useless. My only thought was to get the C172 on the ground.

The nearest airport was several long minutes away, but we had just passed an unmaintained landing strip that appeared useable.

I dialed in the emergency frequency on the radio, called out the mayday and stated that I had a passenger on board who was having a medical emergency. While executing a 180, I announced where I intended to put down and requested that someone call for an ambulance to meet us there.

Completing the turn to the north, I realized that the airstrip was straight ahead and much closer than anticipated, which meant I was much too high. I reduced power, pulled on the carb heat, stomped on full right rudder and began a loooong forward slip aimed at the threshold. I briefly thought about dialing 911 on my cell phone but FLY THE PLANE flashed in my brain like old neon.

The 172 seemed take an eternity to lose altitude.

As we approached 500 feet, my CFI passenger declared, “OK, let’s climb back up to 3,000 feet.” I released the rudder pressure, centered the yolk, and the Cessna instantly straightened. I added full power and shoved the carb heat in. The simulated emergency was over. No one was ill and my calls had been heard only in the cockpit.

“That was interesting,” my passenger said. “Not what I expected, but effective. However, you didn’t use the checklist.” 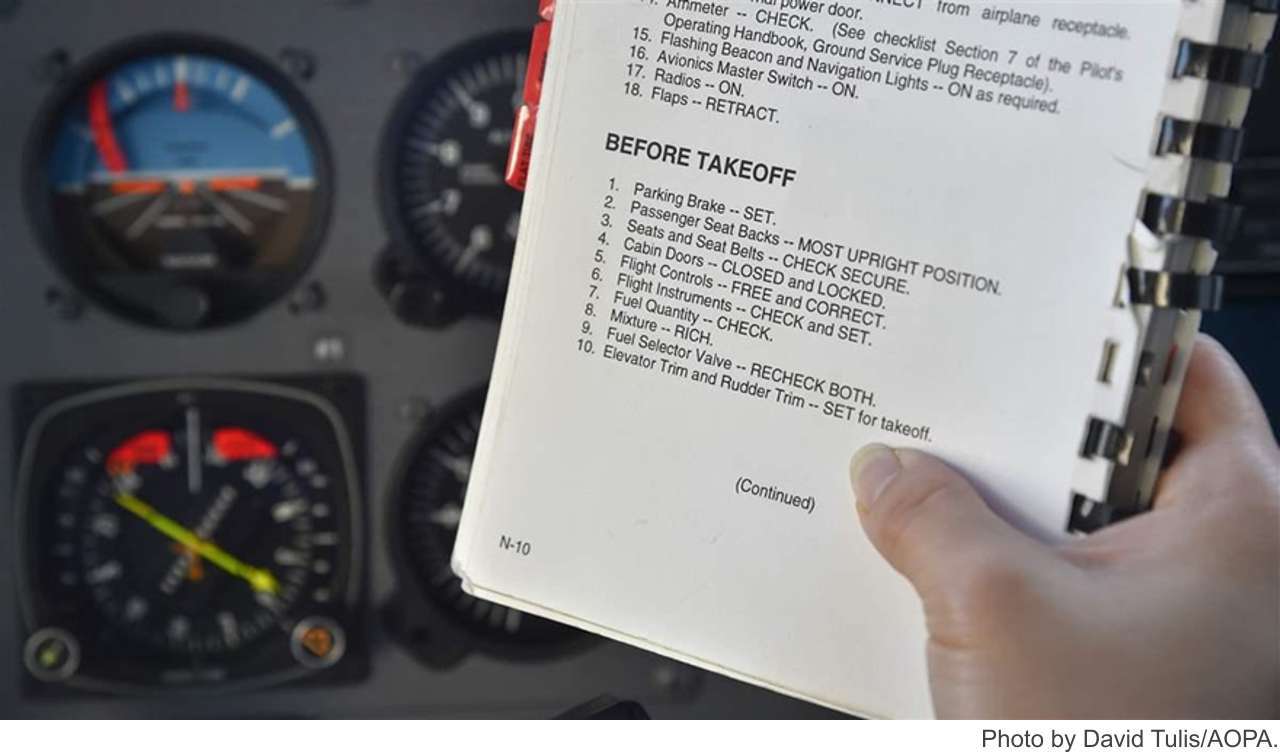 CHECKLIST? Really??? I was a little busy back there! Aviate, Navigate, Communicate did leap to mind, but Checklist never made an appearance.

On the other hand, and at another time, I was practicing slow flight maneuvers when the 172’s Garmin suddenly blinked out and the lowered electric flaps got all contrary. When it finally dawned on me that the entire electrical system had flown this coupe, the checklist was the first thing I reached for. (Personal note: when all radio chatter fades to silence, the cockpit becomes a surprisingly lonely place!)

It’s not that checklists aren’t useful. It’s that too often they’re not very useable.

I once made a living of sorts designing ads, brochures, and other assorted print media. One of the things I learned was how to lead a reader’s eye to the information I want them to see. That’s why I get curmudgeonly around bad checklists that do their job poorly. If you’re flying in a busy traffic area or in the thick of an emergency, trying to find the applicable page is not where your focus needs to be!

Obviously, this is more of a solo gripe. It’s not quite the same problem when you’re flying with a partner or have a First Officer handy who can manage the page flipping.

Most – but not all – rental aircraft have some kind of a checklist on board along with the FAA required documents. But there are no specifications for a separate checklist. An FBO or flight school can provide you with whatever they see fit. I know one that charges $20 for an unwieldy flip book!

Commercially printed, laminated checklists can be found in racks at FBOs and on-line, but they are hardly an improvement, and they’re not inexpensive either. There are also checklist apps for phones and tablets. Yes, they’re customizable, but try getting back to the right listing when the pressure’s on after you’ve inadvertently pressed the wrong button. Again, not where you’re focus needs to be!

My cardinal rule is that a checklist should not add to a pilot’s workload.

Think of them as cue cards. We already know this stuff. But we also know that flying is a complex skill and it can be helpful to have easy reminders at hand when the engine hiccups and your heart rate is about to exceed the model number of your Cessna. But the most common use of the checklist is to double check our routine actions. Contrary to what we want to believe, pilots are fallible beings. Don’t tell my wife I just admitted that.

My ideal checklist has all the information I need on one, double-sided, laminated sheet: Normal Procedures on one side, Emergency Procedures on the other. It should flow properly, with one section following the previous in the same order that I use the airplane, from startup to shutdown. Individual tasks within sections should be numbered, so if I’ve just completed 6. Circuit Breakers . . . . . CHECK, my eyes can quickly jump to number 7 when I look back at the list. And the use of color should be intuitive: Green (as in GO) for normal items, and Red to shout Emergency! when you need to locate an item under pressure. And, it uses fonts that are easily readable. Attention needs to be paid to the character sizes, kerning and line spacing. Those kinds of details can greatly increase usability.

Last week, the team at JB Aviation, with input from the CFI’s at Galt Airport, equipped several of their Cessnas with new checklists that do the job simply and effectively. Their remaining aircraft will get new checklists shortly. Yes, I got to add my two cents during the process. You can see the new checklists on JB’s website:   https://46lnj1263d7d41w1cde8t641-wpengine.netdna-ssl.com/wp-content/uploads/2020/01/N80670-Checklist.pdf   or anytime you use one of their airplanes.

It’ll be right there in the left pocket…complements of JB.