A Rainy Forecast Becomes a Super Day Out! 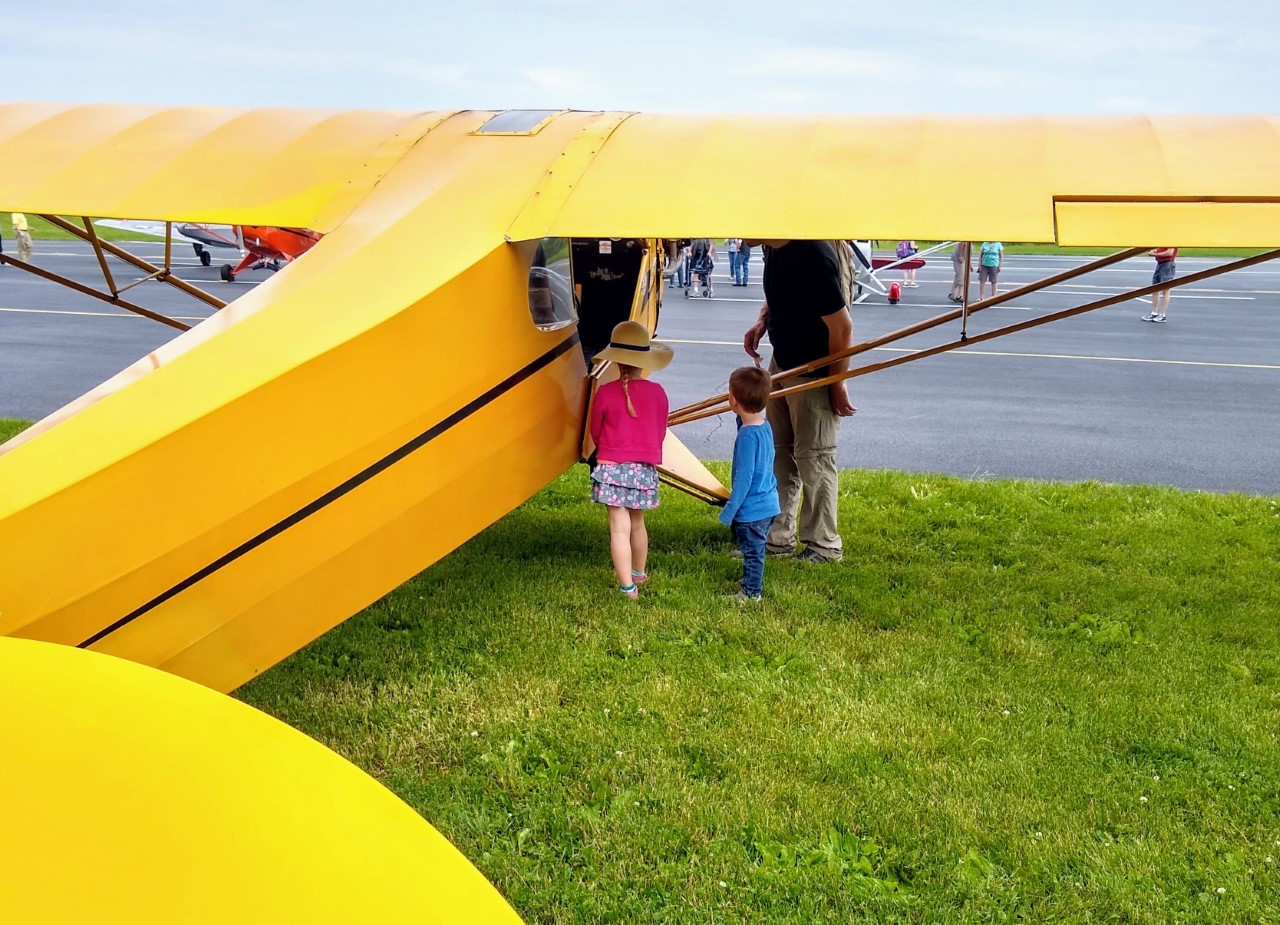 As we closed the book on Barnstormer’s Day 2019, there was a huge sigh of relief. Anyone who has attempted to schedule flight time since the beginning of this year knows that the weather gods have been out to get us. With last year’s late night storm in mind, there was real concern about putting up the big top tent the evening before, fearing a storm could reduce it to strips of canvas. In spite of the outlook, the crew of volunteers managed to get things set up, and everyone crossed their fingers. 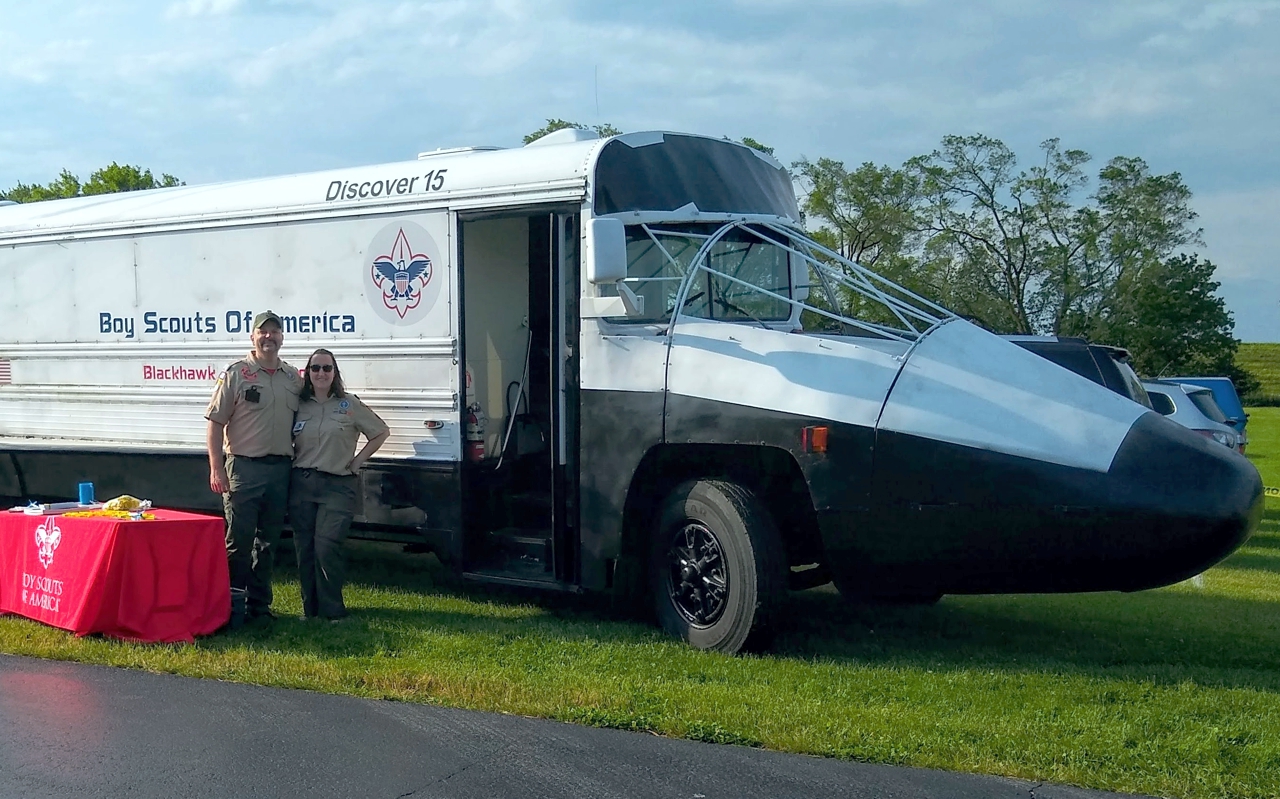 On Saturday morning the weather looked sketchy, but the grills were fired up and pancake batter was made ready, 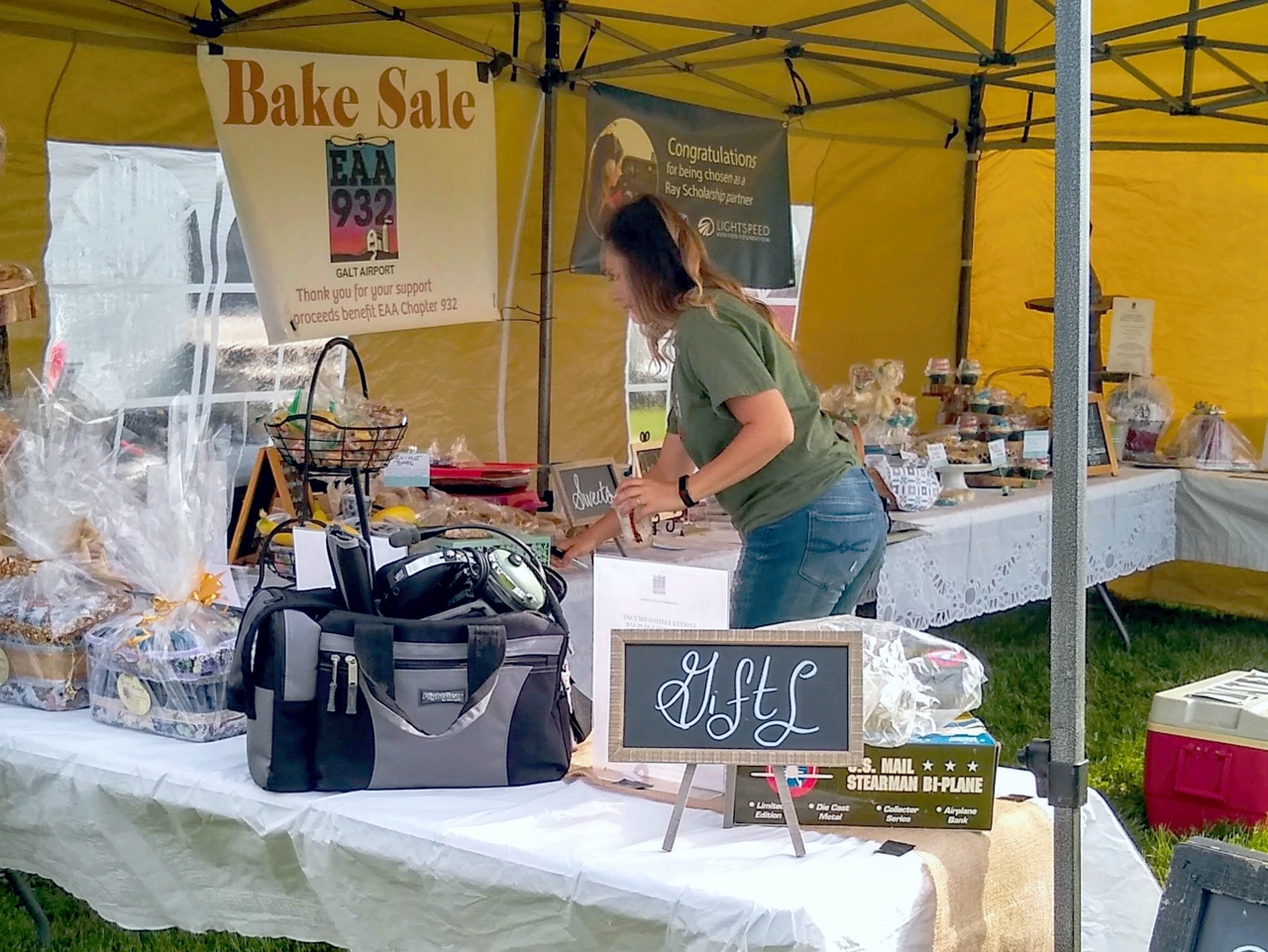 The Civil Air Patrol was out in force and the Boy Scouts arrived in their “Space Shuttle” bus. Bake sale volunteers assembled a great display of goodies while vendors put out their wares. By 8:30, visitors started to trickle in. As the morning unfolded, more people, show cars and airplanes arrived. By mid-morning, the sky started to brighten and all the volunteers began to breath easier.

Among the aircraft that arrived as the morning progressed was a T-34 Mentor wearing U.S. Airforce markings. Dick Wydra brought out his Maule M5 and the Wings and Wheels Museum flew in their very nice 1941 Aeronca Chief project. Three conventional gear Cessna gems flew in from Poplar Grove: a pair of C195 Businessliners and a C180 Skywagon. Jeff Hill Jr. displayed his bright orange 1940 J5 Cub on the ramp while Dave Monroe parked his 1946 Cub Yellow J5 on the grass nearby. A Aeronca Champ dropped in as Parker Johnston was interviewing Paul Fries in front of his stunning silver and red on black 1943 Stearman. Two more Stearmans arrived and were on display on the grass. 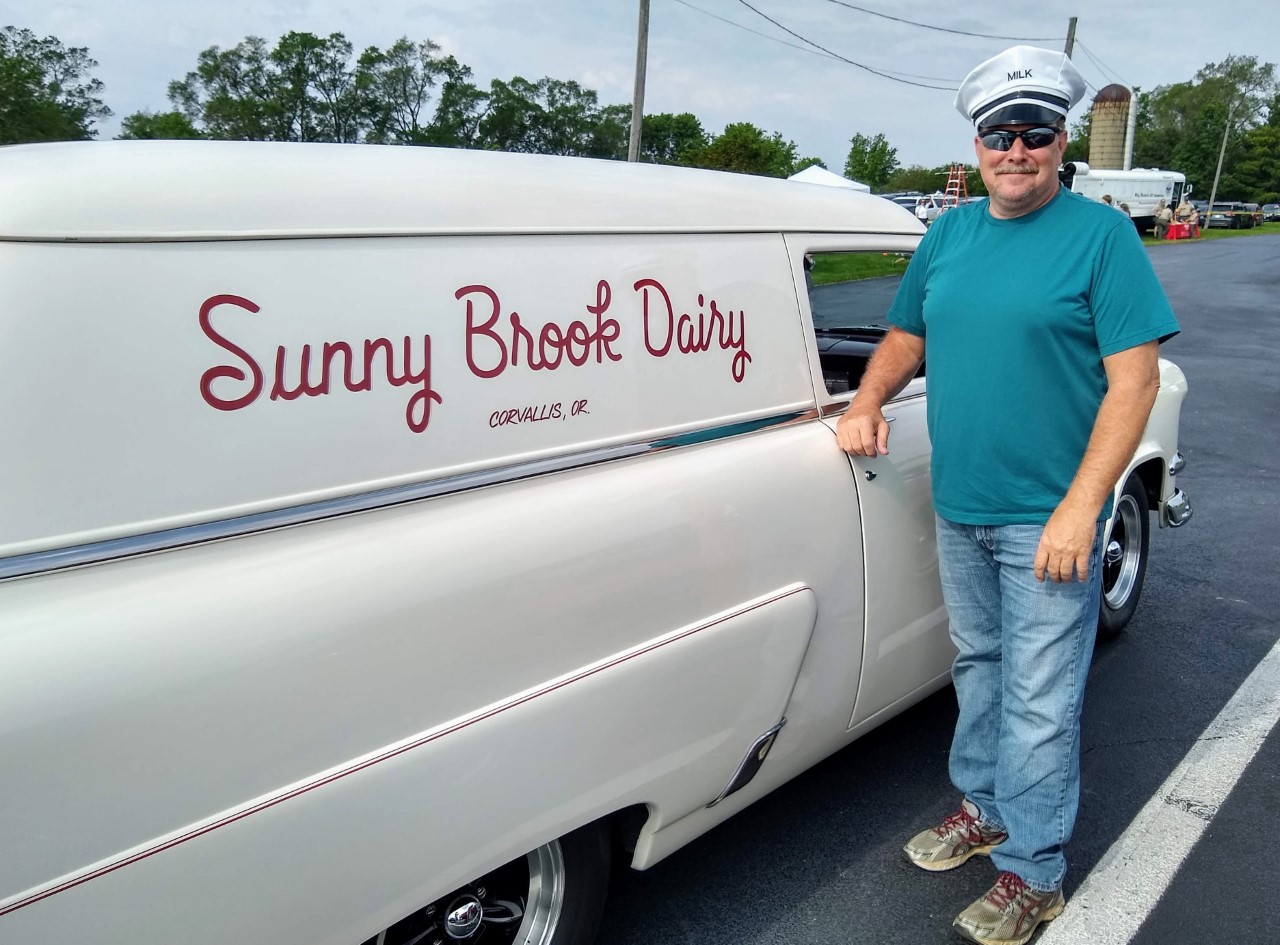 An amazing collection of antique and classic cars started rolling in! One of the more unusual vehicles was Kevin Rogers’ 1954 Ford Courier originally owned by the Sunny Brook Dairy in Corvallis, Oregon.

Neil Anderson again brought several of his hand-built wood and plexiglass model engines. Two of the models demonstrated the difference between an early 9-cylinder radial from WWI that had cylinders rotating around a fixed shaft, and a larger radial of the type used during WWII, that had nine fixed cylinders and a rotating crank shaft. A remarkable, half-scale V-12 Rolls Royce Merlin was on a nearby stand. Visitors were welcome to operate each of Neil’s engine models by hand as he answered any questions. 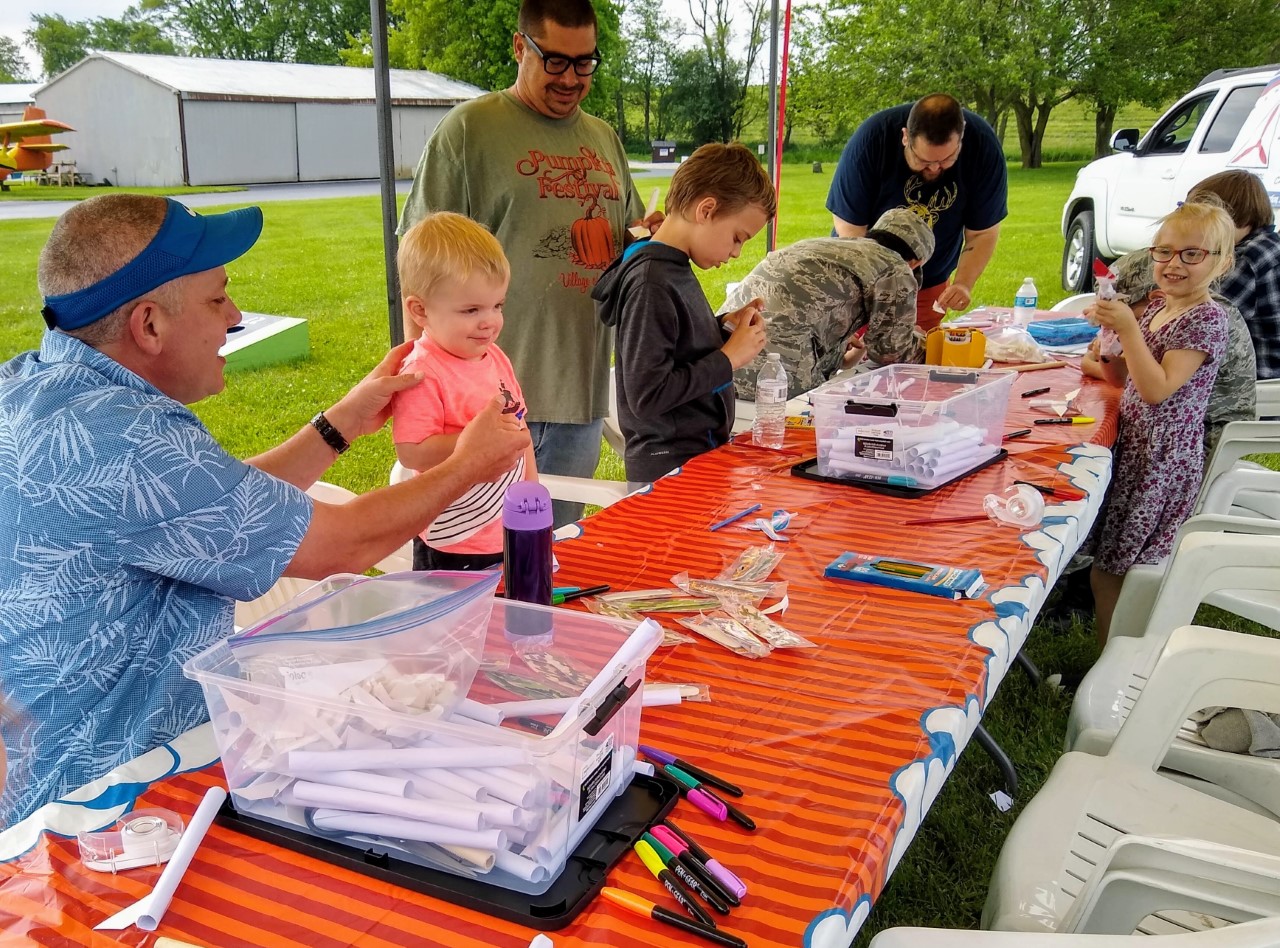 The kids section may have been the busiest area on the grounds. Air-powered rockets assembled and decorated by junior sized hands was a huge hit for both boys and girls. Assisted by parents, tots were trying on the Spiro Flyer for size. With some instruction from the Scouts, kids created some whopper bubbles. Occasionally a giant bubble was seen drifting across the runway. Kiddos of all ages tried their hand at landing a foam glider with guidance from several CAP Cadets. All the other games saw plenty of use, too. Special thanks go out to the Boy Scouts and Civil Air Patrol for their patience, good humor and help! 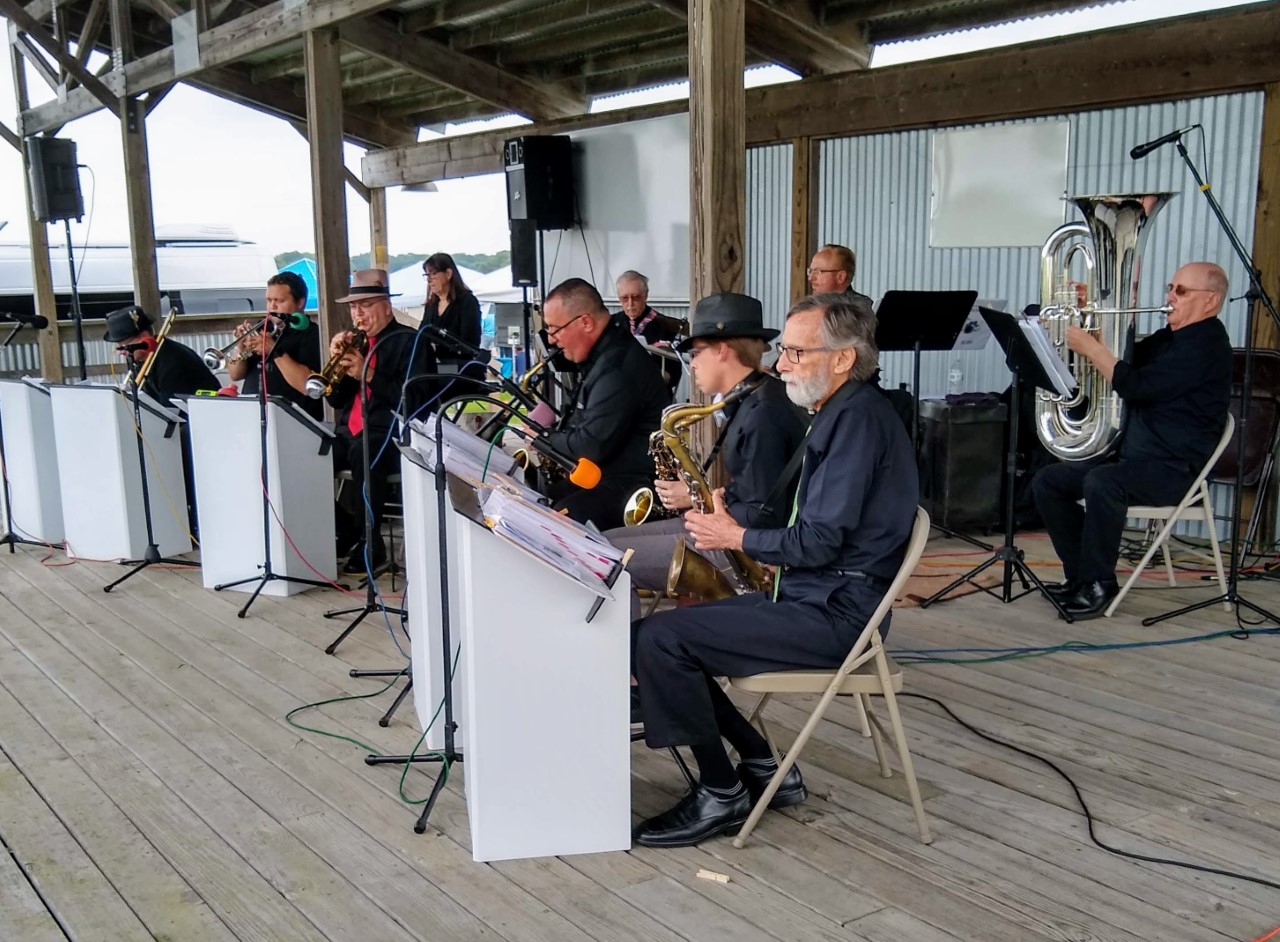 Thanks also to the members of Bill’s Little Big Band who were on-stage throughout the event providing their excellent brand of entertainment, music from the 40’s and 50’s.

Of course, Barnstormer’s Day couldn’t have happened without the many dedicated volunteers who put so much time and effort into making it the special day that it was. Thank you!

The threat of rain may have kept some folks away but those who took the chance and headed out to Galt enjoyed a great day!